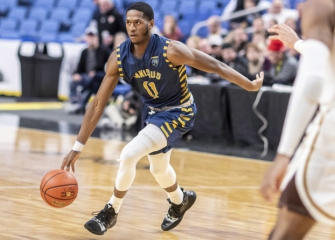 Armon Harried was ready for his chance in Division I basketball. And that shouldn’t come as a surprise to anyone familiar with the former Lake Clifton star.

The coaches’ — as in two coaches — son knew what it took to succeed at the next level and well, he’s pretty sharp to start with. Harried was the Lake Clifton valedictorian last year, so beyond basketball he had some bona fides to recognize he was in the right place at the right time, starting 31 of 32 games at Canisius this past winter.

“He will not back down from challenge,” fourth-year Canisius coach Reggie Witherspoon said. “He will always fight his way out, and I think that was what really gave him a chance to get better and learn from this experience.”

Witherspoon said he told Harried that the freshman was playing too many minutes (23.0 per game), but “he never agreed with that,” the coach said. “And that’s a good thing, too.”