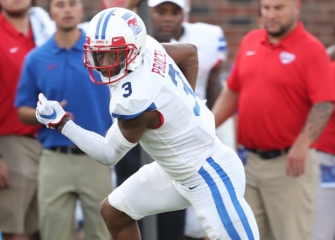 Jim Nagy is the executive director of the Senior Bowl and was an NFL scout for 18 years. He joined Glenn Clark Radio April 9 to discuss the Ravens’ needs at receiver and along the offensive line. Questions were edited for clarity and content.

PressBox: Recent conversation has Arizona State wide receiver Brandon Aiyuk as almost certainly going in the first round and as a guy who’s going to be in that territory for the Ravens. Why do you think all of a sudden we’re hearing more and more about him from scouts and various media leaks?

Jim Nagy: I don’t know what this late push and buzz is about. I’ve always thought Brandon is a borderline first-round guy even going back to the summer when we started watching the tape. In 2018, Arizona State really force-fed the ball to N’Keal Harry, who was the Patriots’ first-round pick last year. When we looked at [Aiyuk] over the summer, I think he only had like 33, 34 catches, somewhere in that range, and we really thought he’d be the breakout star of the college football season. And he was; he had a great year. He’s a really unique guy from a body type perspective. He’s only like 5-[foot]-11, 6-foot, but he’s got crazy long arms. He’s got an 80-inch wingspan. He’s got the wingspan of a guy who’s 6-[foot]-9, so catch radius wise, he’s not your typical 5-[foot]-11, 6-foot guy. Really, really unique body type. Explosive playmaker; would’ve run faster at the Combine. I want to say he was like high 4.4, low 4.5 for most scouts I talked to.