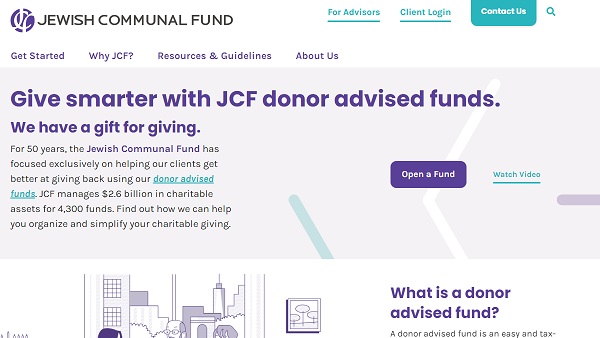 Jewish Communal Fund (JCF), the largest and most active Jewish donor advised fund in the country, is ushering in the new year with new leadership. The organization, which is celebrating its 50th anniversary of philanthropic stewardship, announced the appointment of Michael L. Stern as President, succeeding Teena Lerner.

“We are so fortunate to have Mike serve as JCF’s President, and benefit from his strong leadership, vast experience, and passion for making charitable giving more efficient and intentional,” said Rachel Schnoll, Jewish Communal Fund’s CEO and Executive Vice President. “He represents the second generation of his family’s deep commitment to Jewish Communal Fund and strong Jewish communal involvement.”

Michael is a partner at Stonehill Capital Management, an investment firm based in New York. In addition to his role as President of JCF, he also serves as a member of the board of the Slifka Center for Jewish Life at Yale. He lives in New York with his wife Janna and their four children.

“As JCF celebrates its 50th anniversary, I am honored to play a role in setting the stage for our next 50 years of philanthropic leadership,” Michael said. “JCF has earned the trust of its fundholders, advisors, and community leaders, and plays a pivotal role in making our communities better places to live.”

The JCF Board of Directors elected two new trustees: Jerry Kestenbaum and Marc A. Utay.

Jerry Kestenbaum is the Founder of BuildingLink, the premier SAAS provider of operational and communication platforms to residential luxury high-rise buildings. With over 4,000 client buildings and 1.5 million residents across 37 states, and 21 countries, BuildingLink has often provided an “on-ramp” to companies looking to market products or services to this market.

Marc Utay is the Managing Partner of Clarion Capital Partners, LLC, an asset management firm in New York City specializing in growth oriented Private Equity. Marc graduated from the Wharton School at the University of Pennsylvania with a bachelor’s and an MBA.

JCF also announced the hiring of Marina Lewin as its new Chief Operating Officer. Lewin is a seasoned executive who has successfully driven growth at in financial services and nonprofit organizations. Most recently, she served as COO of the Foundation for Jewish Camp, following a 30+ year high-profile career in banking. Marina serves on the board of the JCC Manhattan and Hazon. Marina received her bachelor’s from Barnard College/Columbia University and MBA from New York University.