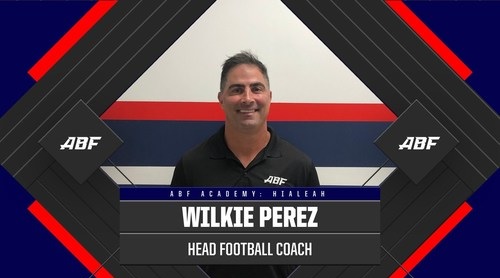 Wilkie Perez began his football career as a quarterback and special teams player for West Virginia University. After playing on full scholarship for the Mountaineers, Perez transferred to Glenville State College in Wheeling, West Virginia. During his time at Glenville, Wilkie Perez led his team to a WVIAC Conference Title and received NCAA Division II National Offensive Player of the Year and WVIAC Player of the Year honors in 1997. Perez would continue his playing career at Glenville State College until he graduated in 1999 with a Bachelor’s Degree in Sport Management.

Coach Wilkie Perez returned to West Virginia University in 2001 as a Graduate Assistant for the football program under Head Coach Rich Rodriguez. During his tenure, the Mountaineers orchestrated a one-season turnaround of the program having gone 3-8 in one season to playing in the Continental Tire Bowl the following season. In addition to serving as a coach at a NCAA Division I program, Perez graduated with a Master’s Degree in Athletic Coaching Education from WVU. In the years that followed, Coach Wilkie Perez worked as a quarterbacks coach at Shayside High School, returned to Glenville State College as a wide receivers coach, and eventually made his way to Champagnat Catholic School in Hialeah, Florida. While at the Champagnat, Perez worked in Offensive Coordinator and Head Coach capacities, played in four State Championship games, and won two State Titles with the Lions.

ABF Academy announced their purchase of the Catholic School in August of 2022. In the months that followed, leadership has transitioned the program over to ABF Academy: Hialeah. The hiring of Coach Wilkie Perez signals ABF Academy’s commitment to reviving a storied football program under a new banner. Beginning in the Spring of 2023, Wilkie Perez will be charged with building a football program that rivals the success experienced by his previous team. “Coach Perez is not only a proven winner, he flat out loves the game of football,” said Manny Riera, “and that passion for the game is a passion he shares for all student-athletes enrolled at ABF. We are extremely lucky to have someone like Wilkie joining our efforts to create competitive athletic programs in the years to come.”