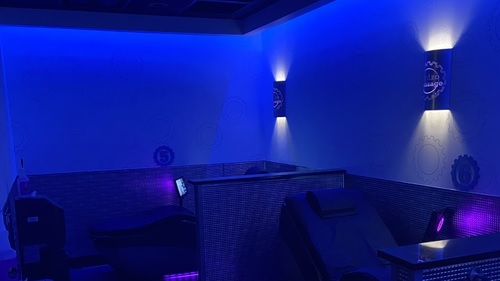 TIMONIUM, Md. – Planet Fitness – one of the nation’s largest and fastest-growing franchisors and operators of fitness centers with more members than any other fitness brand – announces that its Golden Ringclub (8821 Pulaski Hwy., Baltimore, MD 21237)recently underwent $1.6million worth of renovations and was expanded by 2,200 square feet.

“We are committed to giving back and reinvesting in the Golden Ringcommunity and are thrilled to unveil our brand-new Judgement Free facilities to our existing and soon-to-be members,” said Victor Brick, co-owner of PF Growth Partners (PFGP), a franchise division of Planet Fitness. “Already, we’ve experienced an outstanding response from the community and encourage everyone to come check out the club during our official grand reopening event, meet our friendly staff, get a tour and see what the Judgement Free Zone® is all about.”

Because Planet Fitness is the FIRST fitness brand to achieve the WELL Health-Safety Rating by the International WELL Building Institute, Hagerstown members can “Gym confidently” and feel safer going inside when seeing the seal outside – knowing that every Planet Fitness meets the highest health, safety and cleanliness standards available today.

Memberships, starting at $10/month, include free fitness classes led by a certified trainer through the pe@pf® program. PF Black Card® membership includes the ability to bring a guest every day at no additional charge, access to all 2,300+ Planet Fitness locations in all 50 states, as well as access to massage beds, chairs and tanning, among other benefits, which vary by locationand pending local restrictions.

About Planet Fitness
Founded in 1992 in Dover, NH, Planet Fitness is one of the largest and fastest-growing franchisors and operators of fitness centers in the United States by number of members and locations. As of June 30, 2022, Planet Fitness had 16.5 million members and 2,324 stores in 50 states, the District of Columbia, Puerto Rico, Canada, Panama, Mexico and Australia. The Company’s mission is to enhance people’s lives by providing a high-quality fitness experience in a welcoming, non-intimidating environment, which we call the Judgement Free Zone®. More than 90% of Planet Fitness stores are owned and operated by independent business men and women.