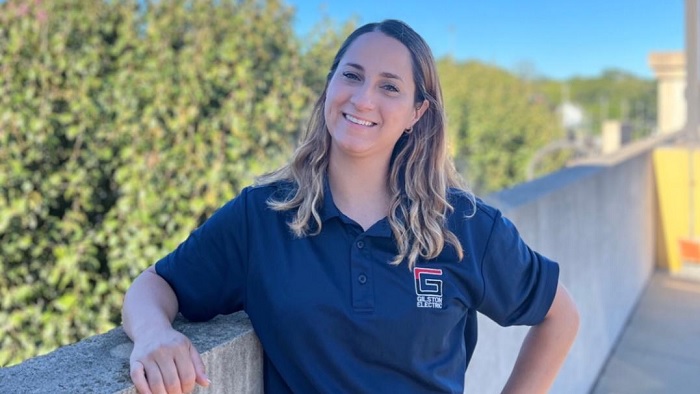 Keysha De Jesus is currently a Mid-Intermediate Journeyperson at Gilston Electric, an affiliate of Electra USA. Her roles and responsibilities vary from project to project. In some cases it can be as simple as installing an outlet or switch, repairing or replacing old wiring or running conduit. In other instances, it can be more involved, such as reading the blueprints and documenting any changes made throughout the job, troubleshooting or ensuring all work being completed is code compliant. Keysha is currently working at a financial firm (Blue Owl at 399 Park Ave) where she is a lead team member building out the lighting and lighting control for the Lutron Quantum System on 3 floors, 100,000 square feet. She has also played a role in fixture layout throughout the job.

Keysha graduated from Morris Academy for Collaborative Studies High School in 2010. After graduation, she completed a Pre-apprenticeship program called Nontraditional Employment for Women (NEW) in 2016 where she was able to learn about different trades. Keysha learned about this program through her father who worked with a female apprentice. It was during this program that Keysha realized she saw a future in this career. In 2017, she joined Local Union #3 as a first-year apprentice and began to work for Gilston Electric. This apprenticeship program consists of 4 years as an apprentice and 1-½ years as a Mid-Intermediate Journeyperson (MIJ). As part of the apprenticeship, she attended SUNY Empire State College Harry Van Arsdale Junior School of Labor Studies and received an associate degree in 2021. Local #3 offers courses and hands-on training at the Electrical Training Center for union members where Keysha was able to take courses on conduit bending, ground and bonding, the National Electrical Code, confined spaces and many other topics.

Keysha strives to continue learning about the trade and one day become a forewoman herself. Eventually, she would like to get her electrical license and to start her own company. Her goal is to set an example as a woman in the electrical construction field who loves their job and has a passion for what they do every day.

When not on the job, Keysha takes great pleasure in the outdoors. She loves to go camping, ziplining and running, and recently went skydiving with her family. Keysha enjoys being adventurous and trying new things and believes you should work hard but play harder!