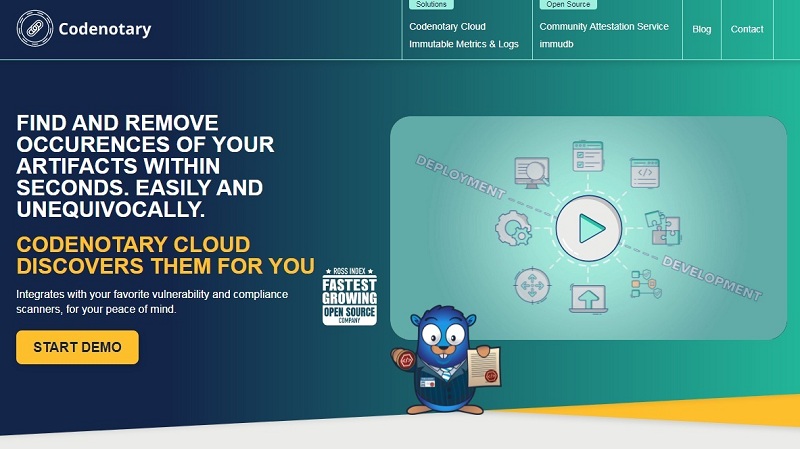 HOUSTON–(BUSINESS WIRE)–Codenotary, leaders in tamper-proof, immutable data protection, today announced that it has secured $6 million in additional funds from new and existing investors bringing the company’s total funding to $24 million.

“Codenotary is at the forefront of software supply chain security which is crucial to the future of software-defined-everything,” said David Chen of Arrize xTec, the new lead investor based in the United Kingdom. “The founders are successful and experienced, serial entrepreneurs. The business has reached an inflection point in growth, and this is where we like to become involved as shareholders.”

Codenotary provides tools for notarization and verification of the software development lifecycle attesting to the provenance and safety of the code. The company provides an indelible solution for processing millions of transactions per second, on-premise or in the cloud, and with cryptographic verification. It gives developers a way to generate and attach a Software Bill of Materials (SBOM) for development artifacts that include source code, builds, repositories, and more, plus Docker container images for their software.

“Software supply chains are under constant attack and so every enterprise is looking for effective ways to protect their valuable software assets,” said Bar. “The additional capital will help us expand faster – increasing our ability to roll out additional features and build out our worldwide sales efforts that includes our partner network. Not every startup company is able to do that right now but we’re fortunate to have good growth and the right investors behind us.”

Codenotary is also the primary maintainer of immudb, the first and only open source enterprise-class immutable database with data permanence at scale for demanding applications — up to billions of transactions per day. There have been more than 15 million downloads of immudb to date, which serves as the foundation for its supply chain security products.

With hundreds of customers that includes top three banks in the U.S. and Europe, Codenotary brings easy to use trust and integrity into the software lifecycle by providing end-to-end cryptographically verifiable tracking and provenance for all artifacts, actions, and dependencies. Codenotary can be set up in minutes and can be fully integrated with modern CI/CD platforms. It is the only immutable and client-verifiable solution available that is capable of processing millions of transactions a second. With the Codenotary tamper-proof bill of materials, users can instantly identify untrusted components in their software builds. For more information, go to https://www.codenotary.com.