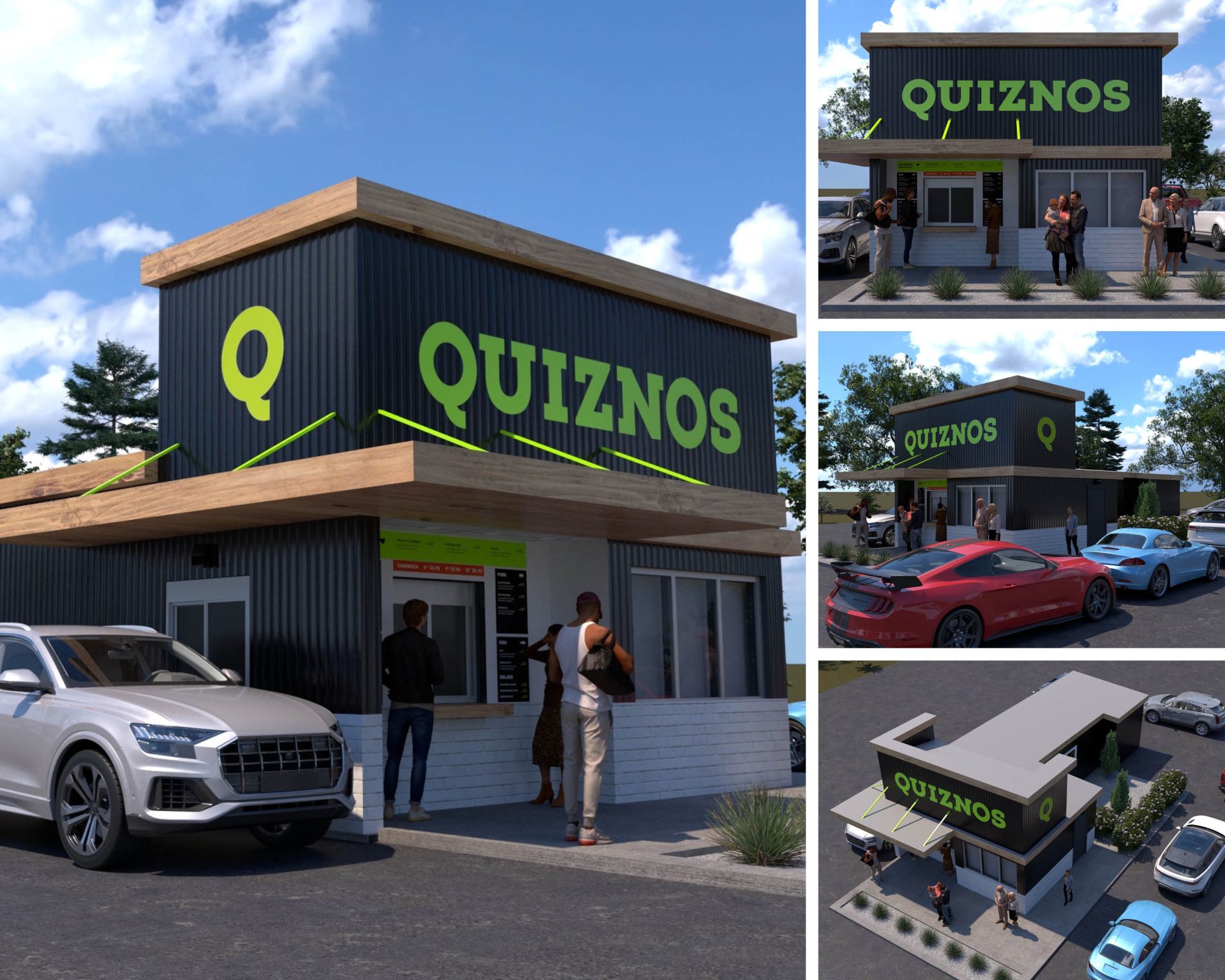 With approximately 650-sq ft layouts designed for flexibility and efficiency, BCubed restaurants include both drive-thru and walk-up windows. Designed to fit on parcels of land that are too small for traditional restaurant development, BCubed restaurants contribute to a lower cost structure that supports labor and operating cost efficiencies. The modular restaurants – dubbed “The Qube” for Quiznos and “Baja Shack” for Taco Del Mar – are readily manufactured off-site and then shipped fully equipped, pre-wired, pre-plumbed and inspected to any site, dramatically reducing the development timeline.

The innovative concept was created by BCubed President Jeff Konczak, a real estate developer and entrepreneur who developed a modular restaurant concept with a streamlined development process to improve the economic model for investors and offer a unique and appealing experience to consumers. As the exclusive manufacturer of modular restaurants for REGO, BCubed Manufacturing is vertically integrating its process to reduce the cost and development timeline for Quiznos and Taco Del Mar franchisees, including decreased inventory lead times and accelerated production timelines. For Quiznos, which has recently invested in improvements to nearly every aspect of its business – from an updated store design and re-branding initiative to a revamped menu and new kitchen equipment – the prospect of offering a new, unique model along with traditional site development opportunities provides multiple growth avenues for potential and existing franchisees.

“When Quiznos first started in 1981, it was a complete disruptor, not unlike BCubed,” says Tim Casey, CEO of Quiznos. “It was doing things that no other brand was doing and we’re now returning to those roots as the most innovative franchise, by reinventing the brand and making Quiznos an outstanding investment opportunity for entrepreneurs who are seeking profitability and growth. This exciting partnership with BCubed is an important aspect of Quiznos’ overall growth efforts designed to prioritize ROI potential for franchisees.”

Information about “The Qube” can be found on the new website OwnaQuiznos.com, created to support the resurgence of interest in Quiznos as it reclaims its position as a category pioneer. Ownaquiznos.com, which contains details about the brand’s improvements to its business model as well as information about ongoing innovation efforts, has already gained significant attention from potential investors.

“I look forward to working with REGO and its brands, bringing them not just our building expertise but also an ability to scale through reduced construction lead time and a simplified process,” said BCubed President Jeff Konczak, whose business Alpena Marc, LLC recently signed a two-unit development agreement to build and operate a Quiznos and a Taco Del Mar in Alpena, MI, in the coming months. “Their approach aligns with mine, which ultimately comes down to wanting to do creative things with brands that are making an impact.”

“We have every reason to believe that Quiznos and Taco Del Mar will be as ubiquitous as ever once again,” added Casey. “How fast we achieve that depends on franchisee enthusiasm, which to date has been resounding.”

For those interested in owning an iconic sub franchise, visit OwnaQuiznos.com.

High Bluff Capital Partners is a private investment firm specializing in consumer-facing companies and brands with the potential for transformation and significant growth. The firm’s team has extensive experience investing in, managing, leading and reinvigorating consumer businesses across the restaurant, entertainment, food, beverage and retail markets. More information can be found at www.highbluffcap.com.

The idea came about when a traditional food service store front location couldn’t support a drive-thru and owner Jeff Konczak thought it needed one. One day at lunch, he sketched plans for a modular drive-thru facility on the back of a napkin.

Jeff pitched his idea to Biggby Coffee, the fastest growing coffee franchise in America. They loved it! The first BCubed for Biggby Coffee store was installed in 2018 with the 40th building scheduled to be installed in the fall of 2022.

Manufactured in a reclaimed foundry in Alpena MI, BCubed units are superior quality, standalone, sectional drive-thru buildings. BCubed Manufacturing buildings are “plug and play” as they come pre-plumbed and pre-wired. They are a capital investment that is movable and expandable.