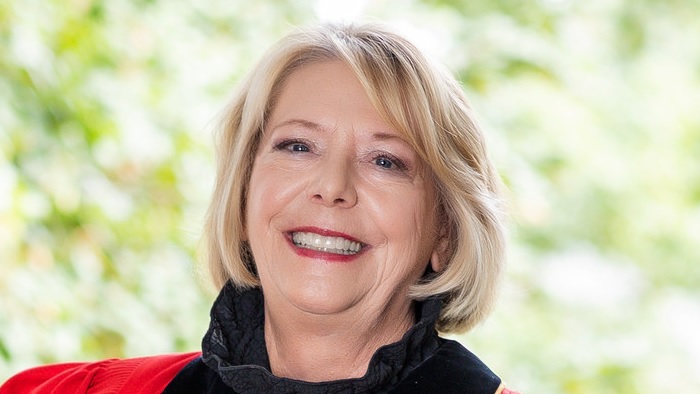 “With humility, I have been extraordinarily honored to lead and serve alongside each of you,” Fox said. “We have worked together with shared commitment to maintain our momentum with devotion to the mission, legacy, and promising future of MBU.”

Fox’s retirement was formally announced during MBU’s annual State of the University address.

Her history-making presidential tenure is the longest since MBU became a four-year college in 1923 — and one of the most transformational in the university’s 181-year history:

“It takes a leader with the most extraordinary qualities to guide an institution through such times and remain true to its mission,” said former MBU Board of Trustees chair Jane Harding Miller ’76. “Pamela has been such a leader, and while the Mary Baldwin of today looks quite different from that of 20 years ago, she has safeguarded its mission and spirit.”

Fox’s presidency elevated the prestige and recognition of MBU and Staunton, and has included significant service, including appointments to the boards for the American Shakespeare Center, Frontier Culture Museum, and Woodrow Wilson Presidential Library. She is a member of Rotary International; the Greater Augusta Regional Chamber of Commerce named Fox its 2012 Citizen of the Year.

“Pamela Fox has led Mary Baldwin through one of the most transformative and sustained periods of growth and evolution in our history,” said MBU Board of Trustees chair Gabrielle G. “Gabby” McCree ’83.

Founded in 1842, Mary Baldwin University is a small, private university with a broad range of undergraduate and graduate degree programs. It serves a diverse student population on its Shenandoah Valley main campus, neighboring health sciences campus, and online.