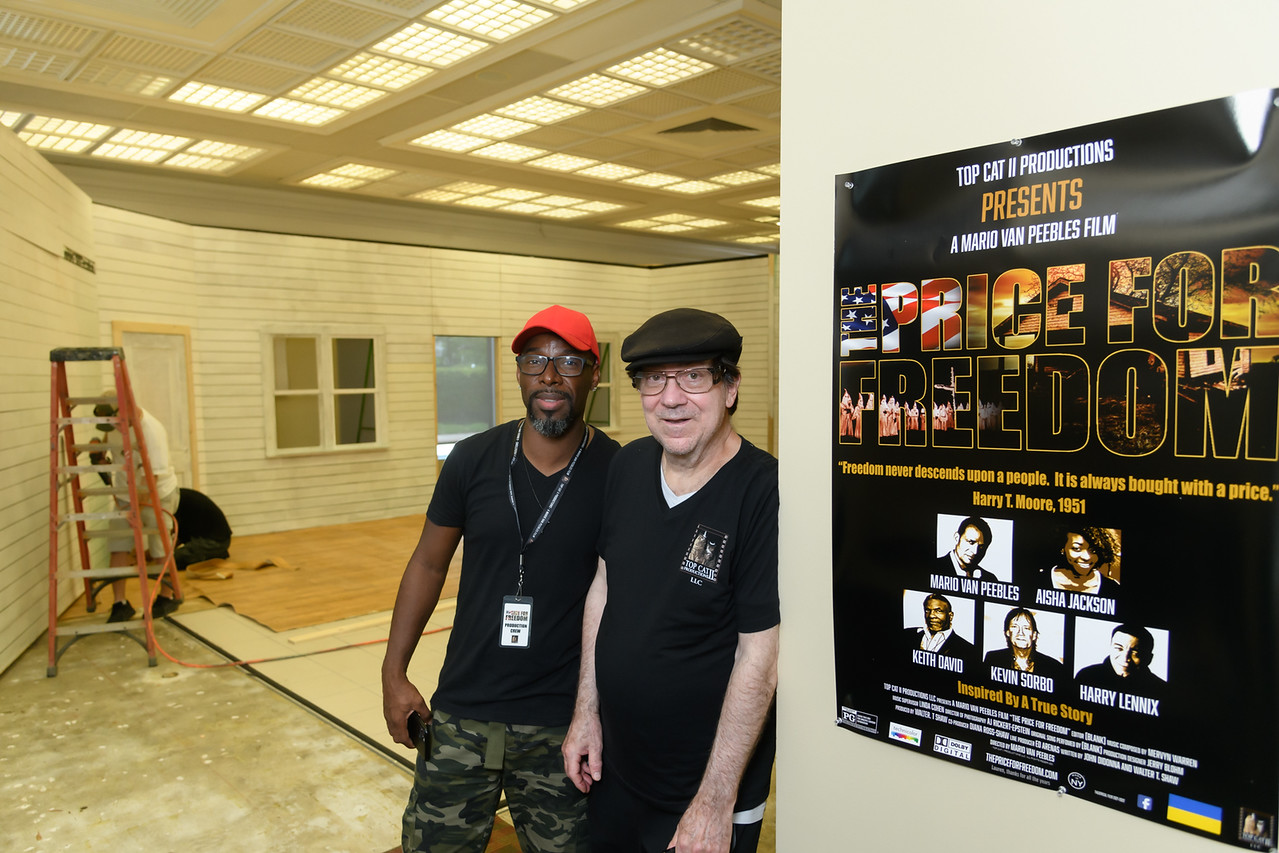 “The Price for Freedom” Producer Walter Shaw (right) with South Florida-based filmmaker Luner Eugene, who is part of the production crew.

It is often said that history is told by the winners. With the losers silenced or dead, what actually happened is often distorted through subsequent interpretation, omission or outright lies as recollections simply disappear with the passing of generations.

Currently, a group of people who believe in racial justice are determined to ensure that the story of Harry T. and Harriette V. Moore — Black teachers and voting rights advocates — will be told with the respect it deserves. That is, if Florida’s “Stop WOKE” law doesn’t stand in the way.

Among their monumental achievements, the Moores were credited with increasing the percentage of Black voters in Brevard County from a paltry five percent to 37 percent — no small task for a Black couple in rural Florida during the 1930s and 40s who were active with the NAACP and similar causes. They were fired from their teaching jobs, after which Harry correctly predicted to friends that he would pay for his civil rights advocacy with his life. In 1951, the couple was murdered in their sleep at home early Christmas morning in Mims, Florida.

Filming by my production company is set to begin in South Florida on a full-length movie, directed by and starring Mario Van Peebles, called The Price for Freedom, about the Moores’ lives and the outrageous fact that no one was ever charged for their murders, although the identities of the killers were known.

But by the time we finish making this movie, will it be legal to show it in Florida?

Recently, veteran teachers who opted to participate in heavily incentivized statewide training on Florida’s new “Civics Literacy Excellence Initiative” gave a chilling preview of how the Ron DeSantis “Stop WOKE” law is playing out. It wasn’t so much the new, Christianity-infused curriculum itself, they said, but the trainers’ interpretation of it, which downplayed the role of slavery and racism in the American colonial and Civil War economies.

Florida’s new “Stop WOKE” law claims that children shouldn’t be made to feel guilty about the sins of previous generations. But if we don’t learn about the injustices of the past, how can we ensure a more equitable future for generations to come?

Before “Stop WOKE” became part of the DeSantis playbook, Florida community members, historians and elected officials had galvanized to help us create a teaching unit to accompany The Price for Freedom rollout. Brevard County and PBS television already had their own curricula on Harry and Harriette Moore and other Florida school systems also expressed interest. That was until the curriculum got to Tallahassee for final approval earlier this year just before “Stop WOKE” was enacted.

Freedom of expression fuels the imagination and creativity that define America’s stature in the arts. Left unchecked, the slippery slope of censorship may begin with school curricula and books, but it surely will spread to plays, movies, art and all other types of creative expression. With every important story that cannot be told, America’s stature is diminished.

The somber, emotional tale of Harry T. and Harriette V. Moore certainly isn’t joyful. It might even make a few kids cry. But that surely does not mean that we, as enlightened adults, should allow it to be erased it from the history of our State. It is up to each of us, regardless of our political affiliation, to protect the freedom of expression that makes America great. Voicing our outrage over silencing the story of slain civil rights heroes like Harry T. and Harriette V. Moore is the perfect place to start.

Click HERE to read Mr. Shaw’s Letter to the Editor published on August 14, 2022 and a news story about the movie by Eric Rogers HERE in FloridaToday.com (paywall).

Filmmaker and movie producer Walter T. Shaw is the founder of Top Cat II Productions. He is a resident of Fort Lauderdale.