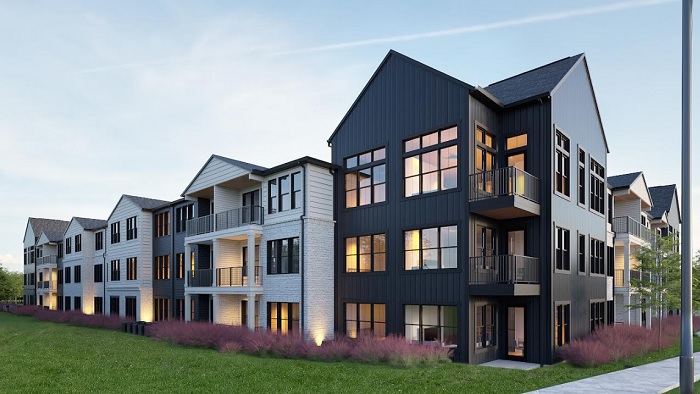 RangeWater Real Estate has achieved several major milestones in the past year as it continues its expansion across the Sun Belt and Mountain West with advances into build-to-rent (BTR) and age-targeted communities.

With more than $1.2 billion in the development pipeline, RangeWater has announced projects throughout the country in Jacksonville, Atlanta, Nashville, Denver, San Antonio and more.

The stellar year was recognized by The National Association of Homebuilders (NAHB), which named RangeWater “Multifamily Development Firm of the Year” for 2021 during the Multifamily Pillars of the Industry Awards in January 2022.

RangeWater’s success is inspired by their growing BTR portfolio under the Storia brand,and new Olea developments, the firm’s age-targeted, 55and older communities, as well as third-party management assignments across the Sun Belt. All are designed with sought-after, high-end finishes, incredible community amenities, and located in desirable neighborhoods like the Atlanta BeltLineand Jacksonville’s Beach Haven.

Since its inception in 2006, Atlanta-based RangeWater, a fully integrated multifamily real estate company, has rapidly expanded across 179 cities in 11 states, with 86,000 multifamily units developed or managed and a balanced portfolio that exceeds $6.3 billion.

This past year has been instrumental in RangeWater’s 18-month strategy to develop its build-to-rent platform called Storia. Launched in November of 2020, the firm currently manages more than two dozen properties totaling more than 3,600 homes in the build-to-rent space, in addition to one ground-up build community leasing in Georgia and more in the pipeline.

“Build-to-rent now makes up 17 percent of our portfolio,” Shores said. “We’ve been awarded 115 BTR projects representing 15,212homes in communities across the country under management or development. Our team saw this trend coming and we were able to quickly ramp up our development process to meet demand.”

The company is one of the most active in BTR in the country. RangeWater currently is working on build-to-rent communities in 80 cities in 11 states for more than 30 clients as well as its own development platform, Storia. By the end of June, RangeWater is expected to have closed on five BTR sites in 2022, adding 846 units to its total new build portfolio, for a total of 1,153 homes. Projects includeLupineand The Armoryserving Denver and Boulder, Colo., Bellerose at Bees Ferry in Charleston, S.C., Beacon Lake Lanier in Flowery Branch, Georgia, The Mabryin Lawrenceville, Georgia, and Maverick on the Atlanta BeltLine trail.

To support its rapid growth, RangeWater has been hiring across the country, as well as expanding its leadership team. Two strategic additions to the executive team recently made were executive managing director of capital markets Ashley Casaday and general counsel Emily Sweitzer.

“These are some of the first appointments to our executive team in nearly a decade,” Shores said. “They play important roles in our company as we grow.”

Over the past year, RangeWater made hires to boost growth on strategic efforts, from BTR to construction to the Western states. Chase Davidson leads the company’s $800 million BTR investment while Alp Kirmizioglu as director of construction has launched an in-house construction division. Karen Key, who joined RangeWater in 2014, now oversees the operations of the management division for the build-to-rent platform.

“All of these hires fit into our culture with a focus on best practices. Each one is thriving in their roles and contributing to our stellar year,” Shores added.

RangeWater is a fully integrated multifamily real estate company creating fulfilling experiences for its partners, clients, residents and employees across the Sun Belt. The Atlanta-based company has acquired and developed more than 20,000 multifamily units since its inception in 2006 representing in excess of $6.3 billion in total capitalization. RangeWater currently manages a balanced portfolio of over86,000 multifamily units across 11 states. With offices in Atlanta, Dallas, Denver, Tampa and Salt Lake City, RangeWater targets high job growth markets with demand for new housing. For more information, visit LiveRangeWater.com.