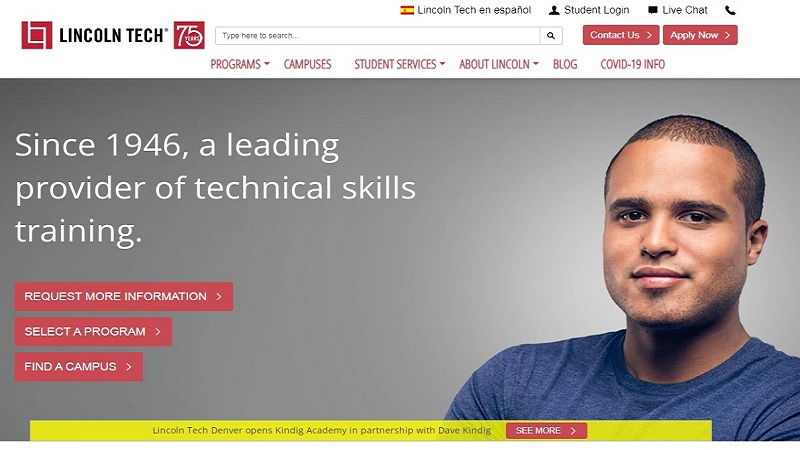 *See Use of “Non-GAAP Financial Information” below.

“During the second quarter, we continued to execute our five-year growth strategy while operating in an exceptionally low unemployment environment that continues to foster significant wage inflation,” commented Scott Shaw, President & CEO. “We announced the development of a second campus in the Atlanta metropolitan market that we forecast will add $20 million a year in revenue and $5 million of EBITDA within four years of its opening. In addition, we entered into three new corporate partnerships with industry leaders in the electric vehicle market, automotive paints and coatings, and collision repair segments. And, we continued to add new training programs at our existing campuses and further implemented a new hybrid education delivery model.”

“Although we achieved four percent student start growth during the quarter, our start growth was less than we anticipated. Throughout this year, we have experienced strong double-digit growth in enrollments across our campuses. However, conversion of these enrollments into new student starts has become more challenging in the current environment. As a result, we ended the quarter with a lower student start rate than we anticipated and expect that these challenges will continue into the second half of the year. We believe macro-operating factors such as ongoing labor shortages, high inflation, and growing economic uncertainty are all playing a role. We also believe that our transitioning to a centralized financial aid support system has temporarily impacted and contributed to recent lower start conversion rates. Centralizing our financial aid support system replaces the decentralized campus system, which when fully implemented by the end of the year will streamline financial aid decisions and award processes.”

“We continue to improve our student retention and graduate placement rates and continue to see strong demand for our graduates. We are confident that the combination of the efficiency improvements we are implementing this year, and execution of our five-year growth strategy will position Lincoln for long-term growth and higher profitability. Our confidence in the Company’s future is expressed in part through the recently approved share repurchase plan which was utilized to repurchase some 400,000 shares during the second quarter.”

Atlanta, Georgia – New Campus. On June 30, 2022, the Company executed a lease for a 55,000 square foot facility. This new facility is the Company’s second campus in the Atlanta metropolitan market and will have the capacity to accommodate approximately 700 students. The campus will deploy the Company’s new hybrid education delivery model providing greater flexibility to students and staff. It is expected to open in the third quarter of 2023, pending necessary regulatory approvals and timely build out. The Company is expected to invest approximately $12.0 million in capital expenditures, net of a tenant allowance of $2.0 million, to completely renovate the interior of the facility, offering students a modern learning environment with advanced technology. There was no involvement in the construction or design of the underlying asset on behalf of the landlord and the Company is not deemed to be in control of the asset prior to the lease commencement date.

Nashville, Tennessee – Property Sale Agreement. During the second quarter, the Company agreed to an extension of the due diligence period under the previously announced sale agreement of our Nashville, Tennessee campus for up to an additional 12 months. Current delays result from the purchaser obtaining approvals for proposed zoning changes. During the extension of the due diligence period, the Company will receive monthly non-refundable deposits totaling $1.1 million until the closing date, which is expected to take place in the second quarter of 2023. This property is classified as assets held for sale in the condensed consolidated balance sheet as of June 30, 2022.

Share Repurchase Plan. On May 24, 2022, the Company announced that its Board of Directors authorized a share repurchase program of up to $30.0 million of the Company’s outstanding common stock.  The repurchase program was authorized for twelve months. Purchases may be made, from time to time, in open-market transactions at prevailing market prices, in privately negotiated transactions or by other means as determined by the Company’s management and in accordance with applicable federal securities laws. The timing of purchases and the number of shares repurchased under the program will depend on a variety of factors including price, trading volume, corporate and regulatory requirements and market conditions. During the second quarter, the Company repurchased 414,963 shares of the Company’s common stock for approximately $2.5 million. The Company retains the right to limit, terminate or extend the share repurchase program at any time without prior notice.

SECOND QUARTER SEGMENT RESULTS
Transportation and Skilled Trades Segment
Revenue increased $1.0 million, or 1.8% to $58.0 million from $57.0 million in the prior year comparable period. The increase was due a to 3.8% increase in average student population driven by a higher beginning of period population in the current quarter of approximately 350 students.

Adjusted EBITDA was $8.3 million compared to $12.8 million in the prior year. The current quarter includes $0.8 million of additional rent expense related to the sale leaseback transaction related to the Denver and Grand Prairie campuses.

Healthcare and Other Professions Segment
Revenue increased $0.7 million, or 2.9% to $24.1 million from $23.4 million in the prior year comparable period. The increase was primarily the result of a 6.3% increase in average revenue per student.

Adjusted EBITDA was $1.8 million compared to $3.1 million in the prior year.

Corporate and Other
This category includes unallocated expenses incurred on behalf of the entire Company. Corporate and other expenses were $8.3 million and $10.8 million for the three months ended June 30, 2022 and 2021, respectively. The decrease in expense in 2022 was primarily driven by lower incentive compensation.

Based on the Company’s six-month results and current expectations regarding a lower level of start growth than previously anticipated, Lincoln is updating its 2022 full year guidance (1) as follows:

*See Use of “Non-GAAP Financial Information” below