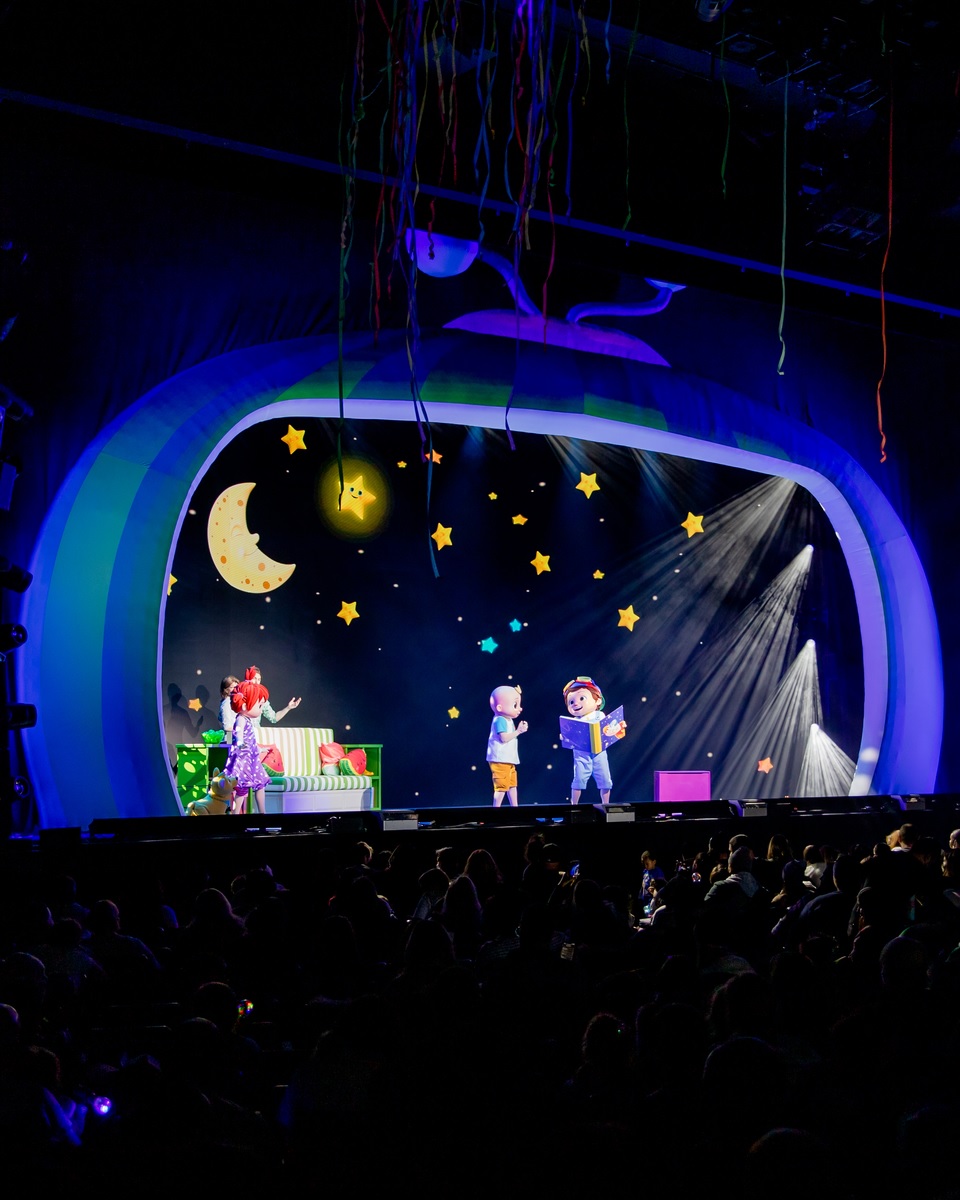 Favorite characters from CoCoMelon, Blue’s Clues, Walt Disney, Marvel and Madagascar join cirque artists and dragons in The Islands of The Bahamas Imagination Series beginning this summer. Tickets for these family-friendly shows at the Broward Center for the Performing Arts and The Parker are on sale now.

The Islands of The Bahamas Imagination Series introduces children to the magic of live theater as they create unforgettable memories with family and friends. After launching with PAW Patrol Live! The Great Pirate Adventure! in early August, the series continues with CoCoMelon LIVE! JJ’s Journey, Blue’s Clues & You!, Disney Junior Live On Tour: Costume Palooza!, Baby Shark Live: The Christmas Show!, Cirque Dreams Holidaze!, Disney’s Winnie The Pooh: The New Musical Stage Adaptation, Dragons and Mythical Beasts and Madagascar The Musical. New events will be added to the series throughout the 2022/2023 season. The series is not offered by subscription.

The Broward Center and Premier Productions present CoCoMelon Live! JJ’s Journey on Tuesday, September 20 at 6 p.m. in the Au-Rene Theater at the Broward Center for the Performing Arts.  Join all of your favorite characters for a toe-tapping, fun-filled musical journey through the world of CoCoMelon. JJ needs a little help to write a song when his family puts on a show, and he learns that with a little help from your family and friends, you can make your dreams come true. CoCoMelon Live! JJ’s Journey features more than 20 songs and magical special effects to create an unforgettable interactive live stage show experience. Tickets are $35-$75 with $10 lap tickets for children 12 months of age and younger and VIP packages at $150-$225 offering a variety of exclusives. All ticket buyers can upgrade to a virtual photo opportunity experience for $75.

Kids and families will fall in love with theater at Blue’s Clues & You! on Saturday, October 1 at 2 p.m. in the Au-Rene Theater at the Broward Center for the Performing Arts. In this epic adventure, Josh is conjuring up a magical theater show with the audience’s help. With Broadway-style song and dance, Josh and Blue skidoo to amazing places including making a music video with Rainbow Puppy and floating in outer space. Young audiences will discover the joy of singing, dancing, and creativity the Blue’s Clues way – with hugs, laughter, smarts and their help. Tickets are $24.50-$59.50 with $10 lap tickets for children 12 months of age and younger. A Blues Clues & You Photo Experience is available for $50 to take a photo with the characters on stage after the show.

The all-new Disney Junior Live On Tour: Costume Palooza! comes to the Au-Rene Theater at the Broward Center for the Performing Arts on Saturday, November 19 at noon and 4 p.m. Beloved Disney Junior characters and favorite Marvel Super Heroes are together live on stage for a jam-packed, concert style show with singing, dancing, acrobatics and more. With favorite songs from the hit Disney Junior series, as well as new original music, Mickey, Minnie and their pals are getting ready to throw a huge costume party but mysterious green rain, wind and smoke keep interrupting the fun. Can Spidey and his Amazing Friends help save the Costume Palooza? Tickets are $25-$65 with $10 lap tickets for children 12 months of age and younger. VIP packages are $175 and include a pre-party and character meet and greet.

Baby Shark and Pinkfong journey into the sea for the holidays to sing and dance through everyone’s favorite songs in Baby Shark Live: The Christmas Show! on Thursday, December 15 at 6 p.m. in the Au-Rene Theater at the Broward Center for the Performing Arts. This one-of-a-kind experience will have fans of all ages dancing in the aisles as they join Baby Shark and friends for exciting adventures into the jungle and under the sea to explore shapes, colors, numbers and so much more. This dazzling kids spectacular includes the song favorites “Baby Shark,” “Five Little Monkeys,” “Wheels on the Bus” and “Monkey Banana Dance” as well as “Jingle Bells” and other holiday classics. Tickets are $29.50-$49.50 with $10 lap tickets for children 12 months of age and younger. A $50 post-show experience is also available to meet the cast.

Cirque Dreams Holidaze! lights up the stage in this awe inspiring and eye-popping family holiday spectacular in the Au-Rene Theater at the Broward Center for the Performing Arts on Wednesday, December 28 at 8 p.m. and Thursday, December 29 at 2 and 8 p.m. As lights dim and music plays, a fantastical cast of holiday characters come to life presenting an elaborate wonderland in this annual tradition that wraps a whimsical, Broadway-style musical with contemporary circus artistry into the ultimate holiday gift. Reindeer, penguins, elves, jesters and ethereal aerialists balance, juggle and stretch imaginations. Artists and cirque acts perform original music along with new twists on popular favorites as they amaze audiences with soaring acrobatics, gravity-defying feats and lively theatrical production numbers. Tickets are $29-$79 with $128 Spirit Club Level tickets.

Disney’s Winnie The Pooh: The New Musical Stage Adaptation comes to Lillian S. Wells Hall at The Parker on Sunday, February 12 at 2 and 5 p.m. In a new story from the Hundred Acre Wood, told with stunning life-size puppetry through the eyes of the characters we all know and love, this fresh stage adaptation features the Sherman Brothers’ classic GRAMMY®-Award-winning music with additional songs by A.A. Milne. Deep. In the Hundred Acre Wood, a new adventure is about to begin with Disney’s iconic Winnie the Pooh, Christopher Robin and their best friends Piglet, Eeyore, Kanga, Roo, Rabbit and Owl (and Tigger, too). Winnie the Pooh: The New Musical Adaptation is developed and presented by renowned family entertainment creator Jonathan Rockefeller and produced in association with Disney Theatrical Productions. Tickets are $25-$45 with $10 lap tickets for children 12 months of age and younger and $100 VIP tickets that include photos on stage with select characters after the show and other exclusives.

Take your place among legendary heroes, just don’t wake the dragon as Dragons and Mythical Beasts arrives at Lillian S. Wells Hall at The Parker on Sunday, March 12 at 2 p.m. Brave heroes in the audience enter into a magical world of myths and legends in this fantastical new interactive show as they unveil a myriad of dark secrets and come face to face with some of the most magnificent monsters and terrifying beasts ever to walk the earth. Discoveries include the colossal Stone Troll, the mysterious Indrik and Japanese Baku, the Tooth Fairy (not as sweet as you’d think), an adorable Unicorn and majestic Griffin. This brand new spell-binding adventure brings spectacular puppets to life and is from the creators of the West End smash hit Dinosaur World Live. Tickets are $19-$49 with $10 lap tickets for children 12 months of age and younger.

Audiences will “Move It, Move It!” to get tickets for Madagascar The Musical in the Au-Rene Theater at the Broward Center for the Performing Arts on Tuesday, June 27 at 7 p.m. Alex, Marty, Melman and Gloria bound out of the zoo and onto the stage in this live musical spectacular. This brand new musical from Dreamworks (Shrek The Musical) features everyone’s favorite crack-a-lackin’ friends as they escape from their home in New York’s Central Park Zoo and find themselves on an unexpected journey to the madcap world of King Julien’s Madagascar. Tickets are $29.50-$55.00 with $10 lap tickets for children 12 months of age and younger and $110 VIP tickets that include a meet and greet with the cast.

The series is not offered through subscription. Ticketmaster is the only official ticketing service of the Broward Center and The Parker. Buy tickets online at BrowardCenter.org, ParkerPlayhouse.com or Ticketmaster.com; by phone at 954.462.0222 or in person at the Broward Center’s AutoNation Box Office.

Broward Performing Arts Foundation. AutoNation, Bank of America, Greater Fort Lauderdale Convention & Visitors Bureau, Spirit and Sylvester Comprehensive Cancer Center are proud sponsors of the Broward Center. Programs are also sponsored in part by the State of Florida, Department of State, Division of Arts and Culture and the Florida Council on Arts and Culture.

With over 700 islands and cays and 16 unique island destinations, The Bahamas lies just 50 miles off the coast of Florida, offering an easy flyaway escape that transports travellers away from their everyday. The Islands of The Bahamas has world-class fishing, diving, boating, birding and nature-based activities, thousands of miles of the earth’s most spectacular water and pristine beaches waiting for families, couples and adventurers. Explore all the islands have to offer at www.bahamas.com or on Facebook, YouTube or Instagram.