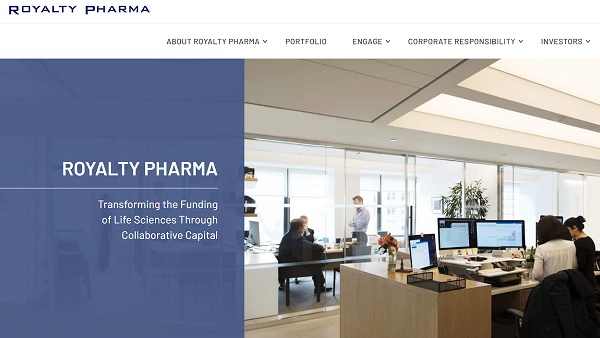 “We continue to make excellent progress against our strategic and financial objectives,” said Pablo Legorreta, Royalty Pharma’s founder and Chief Executive Officer. “Our diverse portfolio of royalties delivered strong growth in the second quarter. In addition, we further cemented our leading position in the royalty funding market with $2.5 billion in announced transactions year-to-date, including the addition of Trelegy, a rapidly growing blockbuster therapy. Looking forward, the tailwinds behind our business remain strong, fueled by the significant capital requirements of the biopharma industry and our ability to create “win-win” funding solutions. By executing against our mission to accelerate innovation and transform patient lives, we are confident in the power of our unique business model to drive long-term, compounding growth.”

Net cash provided by operating activities (GAAP) was $575 million in the second quarter of 2022, an increase of 8% compared to $532 million in the same period of 2021. The increase was primarily driven by higher cash collections from financial royalty assets and offset by slightly higher payments for operating and professional costs.

Total royalty receipts were $633 million in the second quarter of 2022, an increase of 8% compared to $588 million in the same period of 2021. The increase was largely attributable to the performance of the cystic fibrosis franchise and Xtandi, as well as the addition of the royalty on Tremfya. The increase was partially offset by a decline in royalties from the HIV franchise, which reached the end of its royalty term in 2021, as well as an unfavorable foreign exchange impact.

Drivers of royalty receipts in the second quarter of 2022 are discussed below, based on commentary from the marketers of the products underlying the royalties in the preceding quarter (as royalty receipts generally lag product performance by one calendar quarter).

Adjusted Cash Receipts(1) (non-GAAP) were $524 million in the second quarter of 2022, an increase of 10% compared to the same period of 2021, reflecting higher royalty receipts from existing products, including the cystic fibrosis franchise, the addition of new royalties and the decrease in distributions to non-controlling interests. The increase was partially offset by a decline in royalty receipts from expired products, primarily the HIV franchise, as well as an unfavorable foreign exchange impact.

A more comprehensive discussion of the non-GAAP measures utilized by Royalty Pharma to manage its business can be found in the section of this press release entitled ‘Use of Non-GAAP Measures.’

Key Developments Relating to the Portfolio

The key developments related to Royalty Pharma’s royalty interests are discussed below based on disclosures from the marketers of the products.

Royalty Pharma has provided its guidance for full-year 2022 as follows:

This guidance reflects an estimated foreign exchange impact of approximately -3% to -4% (-$65 million to -$85 million)(9) for full-year 2022 year/year Adjusted Cash Receipts(1) growth, assuming current exchange rates prevail for the balance of 2022.

Royalty Pharma expects payments for operating and professional costs to be approximately 8% to 9% of Adjusted Cash Receipts(1) in 2022.

Royalty Pharma today provides this guidance based on its most up-to-date view on its prospects. This guidance assumes no major unforeseen adverse events and excludes the contributions from transactions announced subsequent to the date of this press release. Furthermore, Royalty Pharma may amend its guidance in the event it engages in new royalty transactions which have a material near-term financial impact on the company.

Founded in 1996, Royalty Pharma is the largest buyer of biopharmaceutical royalties and a leading funder of innovation across the biopharmaceutical industry, collaborating with innovators from academic institutions, research hospitals and non-profits through small and mid-cap biotechnology companies to leading global pharmaceutical companies. Royalty Pharma has assembled a portfolio of royalties which entitles it to payments based directly on the top-line sales of many of the industry’s leading therapies. Royalty Pharma funds innovation in the biopharmaceutical industry both directly and indirectly – directly when it partners with companies to co-fund late-stage clinical trials and new product launches in exchange for future royalties, and indirectly when it acquires existing royalties from the original innovators. Royalty Pharma’s current portfolio includes royalties on more than 35 commercial products, including Vertex’s Trikafta, Kalydeco, Orkambi and Symdeko, Biogen’s Tysabri, AbbVie and Johnson & Johnson’s Imbruvica, Astellas and Pfizer’s Xtandi, GSK’s Trelegy, Novartis’ Promacta, Biohaven and Pfizer’s Nurtec ODT, Johnson & Johnson’s Tremfya, Roche’s Evrysdi, Gilead’s Trodelvy, and 11 development-stage product candidates.