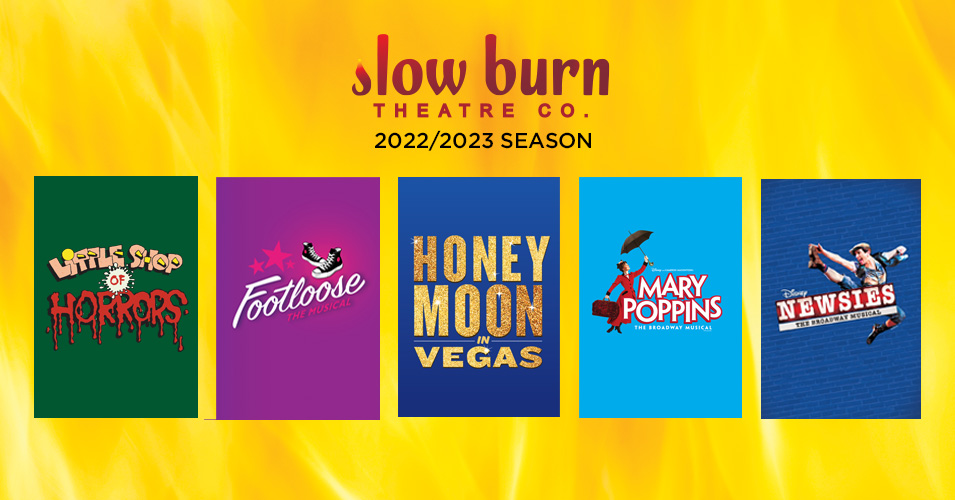 It’s time for musical lovers to rejoice! Slow Burn Theatre Company and the Broward Center for the Performing Arts are excited to announce that single tickets are now on sale for the 2022/2023 season presented by American National Bank. The season has something for everyone, featuring five award-winning musicals with songs that you love, voices you may not have heard before, and a new take on classic stories that will delight audiences at the Broward Center’s Amaturo Theater.

“Now that theater goers feel more comfortable in coming back and enjoying live shows again, we can’t wait for this new season to start,” said Patrick Fitzwater, Slow Burn Theatre Company’s co-founder and artistic director. “Being able to show the public how amazing these must-see works are in person is one of our main motivations to keep working hard and deliver top-quality musical entertainment.”

The season begins with Little Shop of Horrors, running from Saturday, October 15 through Sunday, October 30, 2022. Audiences will feed the need for musical hilarity with this delicious sci-fi smash about a man-eating plant. A deviously delicious Broadway and Hollywood sci-fi smash musical, Little Shop of Horrors has devoured the hearts of theater goers for more than 30 years. Howard Ashman and Alan Menken (Disney’s The Little Mermaid, Beauty and the Beast and Aladdin) are the creative geniuses behind what has become one of the most popular shows in the world. The meek floral assistant Seymour Krelborn stumbles across a new breed of plant he names “Audrey II” – after his coworker crush. This foul-mouthed, R&B-singing carnivore promises unending fame and fortune to the down and out Krelborn as long as he keeps feeding it, BLOOD. Over time, though, Seymour discovers Audrey II’s out of this world origins and intent on global domination!

Just in time for the holidays, get ready to kick off your weekend shows and cut loose with Footloose -The Musical, when one of the most explosive movie musicals of all time bursts onto the live stage. The show runs from Saturday, December 17, 2022 through Sunday, January 1, 2023. Revel in this throwback to teen romance, angst and, of course, the desire to dance! Rock out to the rhythm of the Oscar and Tony-nominated top 40 score (the soundtrack album reached number one on the Billboard charts and has sold more than 15 million copies), elevated with dynamic new songs for the stage musical. Footloose – The Musical celebrates the wisdom of listening to young people and guiding them with a warm heart and an open mind.

Fall in love and get in the spirit of Valentine’s Day with Honeymoon in Vegas – The Musical from Saturday, February 4 through Sunday, February 19, 2023. Based on the hit 1992 film, Honeymoon in Vegas is a hilarious new musical that centers on an unusual love triangle, featuring a wonderful new score by Tony-winning composer, Jason Robert Brown. Mild-mannered Brooklynite, Jack, promised his dying mother that he would never get married, but that was before he met his sweet and beautiful girlfriend, Betsy. Haunted by a fear of mom’s retribution, Jack avoids proposing but, when he finally summons the nerve to whisk oh-so-patient Betsy off to Las Vegas to get hitched, a dashing gambler named Tommy threatens to sweep his fiancée away to a life of luxury in Hawaii. Realizing what he’s about to lose, Jack is determined to do anything to give his love story a happy ending. It all adds up to an action-packed honeymoon that no one will ever forget! Bet the house on this insanely funny new musical that is full of skydiving Elvises, sexy chorus girls, red-hot romance and really cold feet.

One of the most popular Disney movies of all time is capturing hearts in a whole new way. Cameron Macintosh and Disney’s Mary Poppins comes to the stage in the spring from Saturday, March 25 through Sunday, April 9, 2023, Everyone’s favorite, practically-perfect nanny will take audiences on a Supercalifragilisticexpialidocious musical adventure. Based on the books by P.L. Travers and the classic Walt Disney film, Mary Poppins, the musical delighted Broadway audiences during more than 2,500 performances and received nominations for nine Olivier and seven Tony Awards, including Best Musical. Get ready to experience an enchanting mixture of irresistible story, unforgettable songs, breathtaking dance numbers and astonishing stagecraft that will mesmerize audiences of all ages.

Slow Burn Theatre Company’s 2022/2023 season culminates with the Tony award-winning Disney’s Newsies: The Broadway Musical, from Saturday, June 9 through Sunday, June 25, 2023. Set in turn-of-the century New York City, Newsies is the rousing tale of Jack Kelly, a charismatic newsboy and leader of a band of teenaged “newsies.” When titans of publishing raise distribution prices at the newsboys’ expense, Jack rallies newsies from across the city to strike against the unfair conditions and fight for what’s right. Based on the 1992 motion picture and inspired by a true story, Newsies features a Tony Award-winning score by Alan Menken (Little Shop of Horrors, Sister Act) and Jack Feldman and a book by Tony Award winner Harvey Fierstein (Kinky Boots). Featuring the now classic songs “Carrying the Banner,” “Seize the Day,” and “Santa Fe,” Newsies is packed with non-stop thrills perfect for the whole family.

Single tickets will range from $49-$65. Five-show season subscriptions start at $196, offering a savings of 20% over single ticket prices, and patrons can save 10% on individual tickets when they design their own three-or-four show subscriptions. Additional processing fees apply.

The Broward Center 2022/2023 season is supported by the Broward Performing Arts Foundation. AutoNation, Bank of America, Greater Fort Lauderdale Convention & Visitors Bureau, Spirit and Sylvester Comprehensive Cancer Center are proud sponsors of the Broward Center. Programs are also sponsored in part by the State of Florida, Department of State, Division of Arts and Culture and the Florida Council on Arts and Culture.