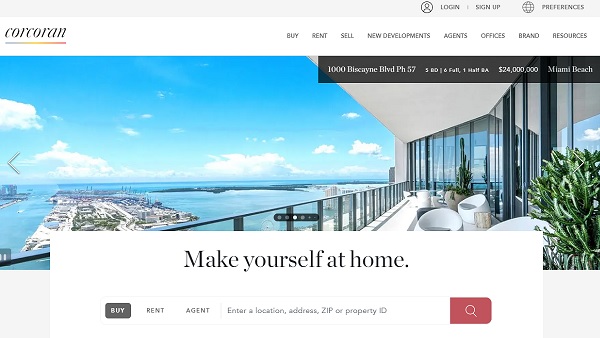 Corcoran Group, LLC today announced its continued expansion by welcoming its newest affiliate in the state of New Jersey, with the launch of Corcoran Sawyer Smith. The firm formerly known as Sawyer Smith Residential is owned and led by Timothy Sawyer Smith, and serves Hoboken and Jersey City. The announcement, made by Pamela Liebman, President and CEO of The Corcoran Group, marks another significant region for the firm in the tri-state area – particularly given its proximity to Corcoran’s origins in nearby New York City.

Behind New York City and Newark, Jersey City is the third largest city in the New York metropolitan area, and Hoboken is strategically located on the banks of the Hudson River across from lower Manhattan – both perfectly positioned hubs close to New York City. The region has beautiful, well-maintained parks that offer ample community spaces, as well as access to amazing restaurants and a bustling arts & culture scene. Ranked as one of the best places to live in the state of New Jersey by Niche and straddling the best of both worlds with beautiful suburban respite and vibrant city environments, Jersey City / Hoboken is an ideal match for the Corcoran brand’s rapidly expanding affiliate network.

“I’m thrilled that we’re growing our footprint in our neighboring New Jersey with Corcoran Sawyer Smith, especially as they’re welcoming team members on day one,” said Liebman. “With Jersey City / Hoboken serving as a key feeder market in and out of New York City, this decision was a strategic one. There are plenty of eager clientele and the area is simply a lovely place to live. I look forward to seeing all that the Corcoran Sawyer Smith team will do as stewards of our growing brand.”

Sawyer Smith has practiced real estate for more than 20 years, having started in New York City and later moving across the Hudson River to work in the burgeoning Jersey City real estate market. After 11 years in new construction sales and marketing, he transitioned to residential sales with the launch of the brokerage that bears his name, founded in 2012 with only two agents. Over the next 10 years, the firm became a driving force in the community and today, the firm recently reached the number three position in total sales volume in Jersey City overall. Smith and his team also value supporting local arts and social organizations as a cornerstone of their growth.

“As a young agent starting in real estate in the mid-1990s in New York City, the Corcoran brand for me represented the very best in properties and professionalism. Fast-forwarding 20 years now, having the opportunity to represent this legacy in New Jersey is quite surreal,” said Smith. “Having run a successful boutique real estate firm for more than 35 years, I am delighted to merge with Sawyer Smith and thereby Corcoran,” added Sisti. “Both companies have impressed me throughout the years. We share similar values, principles, and company cultures. We’re very excited to take things to the next level.”

About The Corcoran Group

The Corcoran Group has been a leading residential real estate brand for nearly 50 years. Through its New York City, Hamptons, and South Florida brokerages, along with its rapidly growing affiliate network, the firm is home to more than 170 offices and more than 6,000 independent salespersons in key urban, suburban, and resort markets nationwide. Corcoran agents earn and keep their clients’ trust with an unwavering commitment to white-glove service, expertise, and integrity. In every market served, Corcoran helps you find the home that’s just right for you. The Corcoran® brand comprises both offices owned by a subsidiary of Anywhere Advisors LLC (f/k/a Realogy Brokerage Group LLC) and franchised offices, which are independently owned and operated. For more information about The Corcoran Group, please visit www.corcoran.com.