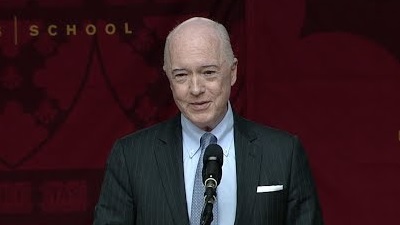 David G. Bradley, chairman emeritus of The Atlantic and founder of The Advisory Board, has joined a $3 million seed financing round for Charter, a New York media and insights firm focused on workplace transformation.

Bloomberg Beta, founded in 2013, is the early-stage venture-capital firm of billionaire Michael Bloomberg. So far, it has raised four funds, each worth $75 million that invests in seed-stage startups. One is focused exclusively on “future of work,” the exact area of focus for Charter. Bloomberg Beta also has an “opportunity fund” that invests in later-stage firms. It has so far made 242 portfolio investments, including nine this year. Besides Charter, its 2022 investments were in Rapidfort, Enveil, Newfront Insurance, Black Crow AI, Enigma, Clearmix, CloudApp and Wrangle.

By his own admission, David G. Bradley, 69, is a “failed politician” who reinvented himself as a successful businessman. He is best known for establishing the Advisory Board Company and its spin off, Corporate Executive Board, two Washington-based consulting companies. Bradley is believed to have earned $300 million from the sale of his stakes in the two firms to Optum and Gartner, respectively.

In 1997, Bradley entered publishing with the acquisition of the National Journal. Two years later, he bought Atlantic Media, publisher of The Atlantic. In 2012, Bradley launched the business-news publication Quartz, before selling it to Japan’s Uzabase six years later.

After being raised as a Christian Scientist, Bradley has wrestled with faith but credited it for rescuing him from “despair,” when he lost his ability to speak. He was 36 when the first incident happened, leaving him without a voice for six months. Over the next 14 years, he lost his voice on and off.

“We’re at a breaking point. As many as 40% of workers are looking to quit their jobs,” Charter’s founders pointed out in a letter. “Roughly three-quarters say they’ve experienced burnout.”

That set Charter’s mission: to “transform every workplace and catalyze a new era of dynamic organizations.” To this end, the New York startup plans to write a “tactical playbook” and build “better models in the face of remote and flexible work, racial and gender inequity, economic inequality, multiple generations in the workforce, automation, and climate change.”

Currently, it host events for workplace decision-makers and runs online training programs on hybrid work in partnership with Nomadic, a business visa and document procurement company. It recently added a research unit to be led by Emily Goligoski, who was previously executive director of audience research at The Atlantic.

Kevin Delaney, one of the three co founders of Charter, serves as the firm’s chief executive and editor-in-chief. He also cofounded the business-news publication Quartz and also served as its editor-in-chief. Delaney has also held senior editorial positions at The New York Times and The Wall Street Journal.

Jay Lauf, Charter’s president and co founder, previously was co-CEO of Quartz and publisher of The Atlantic. He has also held senior positions at Quartz and Wired magazine.

The third co founder, Erin Grau, serves as Charter’s chief operating officer. She has been a member of people-focused startups Chief and Twine and a coach at Bravely. At The New York Times, Grau oversaw digital operations and served as vice president for transformation.