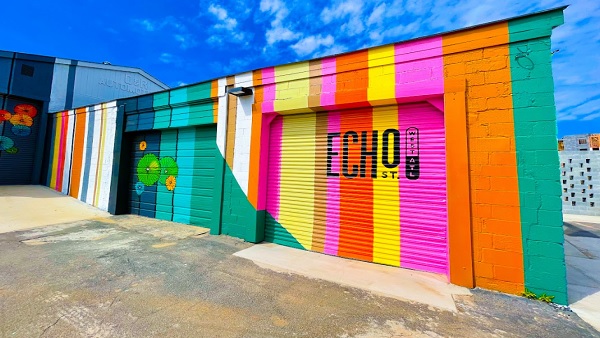 Helfrecht will serve as the studio manager at Echo Street West, with a focus on Guardian Studios, the former factory warehouse turned artist community. As studio manager, she will create opportunities for artists at Guardian Studios by establishing regular gallery hours for the public, launching an annual summer exhibition and hosting up to 12 exhibits per year featuring emerging to mid-career Southeastern artists. In addition, Helfrecht will open her own gallery in Guardian Studios named Echo Contemporary Art. Prior to Echo Street West, she served as artistic executive director for MINT, a 16-year-old nonprofit arts organization that nurtures and promotes Altlanta’s emerging artists through exhibitions, programs, residencies and W.A.G.E. stipends.

As one of Helfrecht’s first orders of business, Echo Contemporary Art will host a grand opening exhibition event on Friday, August 5 from 6:00 p.m. to 10:00 p.m. and feature multi-medium work from 20 local Atlanta artists. Following the inaugural event, Guardian Studios will establish regular gallery hours on Thursdays through Saturdays from 11:00 a.m. to 5:00 p.m. Guardian Studios’ gallery hours are free and open to the public to explore and purchase local art.

Since launching in the summer of 2021, the studios have been leased to a wide variety of local artists each boasting different mediums and focuses, from mural painting and custom upholstery to fine arts and photography. The artist community currently has fifteen additional studios available for lease, ranging from 200 to 1,000 square feet. Guardian Studios also features a 3,000-square-foot open gallery space with 24-hour access, security and other amenities.

“Guardian Studios will establish Echo Street West as a destination for people to gather and appreciate local artwork,” said Helfrecht. “Between the studios, murals and the open space along the Beltline, there are so many opportunities at Echo Street West to create and display public artwork. We plan to be intentional about our artists and the themes that show up in our pieces and will ensure that a diversity of ages, races and gender identities are represented.”

Outside of Guardian Studios, public art is beginning to take shape. Atlanta-based visual artists Neka King, Lela Brunet and Kyle Brooks are the creatives behind the large new murals at Westside Motor Lounge.

Neka King, an illustrator, muralist and fine artist specializing in large-scale activations, was tapped to paint a mural in Westside Motor Lounge’s courtyard spanning an exterior wall and a shipping container. Inspired by minimalism and Afro-centric themes, King’s mural features bold colors and bell shapes, a nod to the area historically known as Bellwood. A blooming flower is also depicted to represent the growth of the community. Her work can be found in multiple editorial campaigns and public installations around Atlanta and the southeast, including Prism Winter Lights, Mercedes-Benz Stadium, Sweetgreen and Microsoft’s Atlantic Yards.

“My minimalistic art style is a perfect blend of my own stories with the stories of the communities I work in,” said King. “I found the history of Westside Motor Lounge’s site inspiring, and I wanted to take visitors on a bit of a journey. The colors I chose – yellow, orange, and blue – represent the activity and high energy of the neighborhood, and I hope visitors can feel that excitement when they visit Westside Motor Lounge.”

Lela Brunet uses the female form as her main subject in a variety of media, including murals, paintings, drawings and graphic design. At Westside Motor Lounge, Brunet’s mural uses bold and bright hues to depict three expressive faces with custom patterns. The mural has been installed along a highly visible outer wall facing Northside Drive and Donald Lee Hollowell Pkwy. Some of Brunet’s clients include Adidas, Microsoft, Starbucks and Pepsi and  her murals can be found in Fairfax, Virginia and across Atlanta, including at SoulCycle, MailChimp, NCR Global Headquarters, Piedmont Center and The Works.

Street-folk artist Kyle Brooks, known in the artist community as “BlackCatTips,” has created a mural on a Mercedes-Benz station wagon found at the former auto repair shop turned Westside Motor Lounge. A free painter of over 20 years, Brooks describes his work as “awe inspiring in a simple way.” The car is adorned with strange animals, weird faces and mystic circles, as Brooks describes it. The car will be placed in the courtyard at Westside Motor Lounge and will serve as a focal point of the venue, surrounded by shuffleboard, outdoor seating and a variety of bars. Brooks’s art has been commissioned by both national and Atlanta-based brands, including Netflix, Delta Airlines, Coca-Cola, Atlanta Braves and Georgia Conservancy.

“Inspired by the history and culture of Atlanta’s Westside, Echo Street West’s diverse artist lineup bolsters the community-centric and modern vision we have for the project,” said Tony Bartlett, executive vice president of Lincoln Property Company.  “When we started out, we knew it was incredibly important to create a place that is welcoming to the community and reflective of one of our core values – innovation. Innovation is at the heart of what we hope Echo Street West will be, and we know that these artists will spark meaningful connections, foster innovation, inspire creativity and connect the people of English Avenue.”

Echo Street West is a 19-acre, mixed-use community rising in Atlanta’s Westside at the intersection of Donald Lee Hollowell Parkway and Northside Drive. Echo Street West is located in short proximity to the Mercedes-Benz Stadium, the World Congress Center, State Farm Arena, Georgia Tech and the new Westside Park and is directly on The Atlanta Beltline Westside Connector, not far from where Microsoft, Apple and Amazon are making investments. Echo Street West is a multi-phase project with the initial development consisting of 300,000 square feet of creative office space, 50,000 square feet of retail and restaurant space, 292 multifamily units, an events venue, artist colony and 3.4 acres of outdoor entertainment and greenspace, including Westside Motor Lounge. Future phases will bring additional office, retail, residential and hotel components to the site.