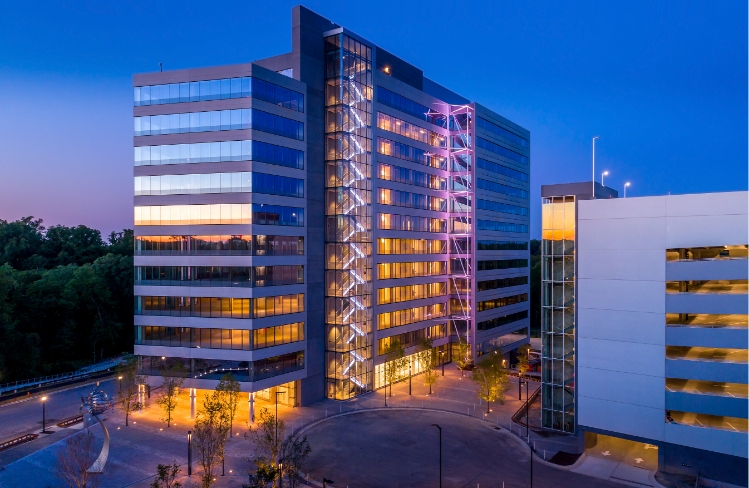 The Howard Hughes Corporation (NYSE: HHC) today announced that CareFirst BlueCross BlueShield, the largest not-for-profit health plan in the Mid-Atlantic region, has leased 80,000 square feet of office space in 6100 Merriweather in Downtown Columbia. CareFirst selected Downtown Columbia as the location for its first major “spoke” office as part of the company’s regional expansion strategy. The lease brings the Class-A trophy office building to 97% leased and continues to demonstrate the appeal of Downtown Columbia as a destination for companies seeking the benefits of the city’s strong job market, with access to an educated workforce, quality lifestyle and proximity to the employee bases of Washington, D.C., and Baltimore.

“We are thrilled that CareFirst has selected Downtown Columbia as they expand to meet the demands of today’s workforce and align talent attraction and retention with company growth,” said Greg Fitchitt, President of the Columbia region for The Howard Hughes Corporation. “The demand for office space in Downtown Columbia continues to grow as leading companies seek quality office buildings in highly amenitized mixed-use environments, integrated into open green spaces with urban walkability.”

CareFirst’s expansion into Downtown Columbia reflects the growing trend of companies transitioning to a “hub-and-spoke” office model, maintaining a centralized location while introducing regional “spokes” or satellite offices in the cities where target employees want to live. Today’s paradigm shift has employees setting the pace and dictating where companies want to be located as they follow the educated workforce moving to communities that offer professional success along with shorter commutes and a higher quality of life. Both companies and employees are gravitating towards this trend for the flexibility and growth opportunities it provides.

“The new Downtown Columbia office marks an important milestone in CareFirst’s future-ready workforce strategy,” said Angela Celestin, Chief Human Resources Officer for CareFirst. “To create the right work-life balance, we continually evaluate the needs of our mobile, hybrid workforce while providing an environment where our employees can perform at their best. This culture of health approach to our workspaces allows us to lean into innovative solutions supporting accessibility and environmental sustainability as we expand to offices in different regions and communities.”

At 6100 Merriweather, a 12-story building offering 320,000 square feet of signature office space, CareFirst’s new office comprises full floors on levels 3 and 4 and parts of levels 1 and 2. CareFirst joins a roster of leading companies in the building including Tenable, one of the fastest growing cybersecurity software companies; Advarra, the premier provider of IRB, IBC and compliance consulting services for clinical research; Ames Watson, a privately held investment management firm; and Insperity, a human resources and business solutions provider. Downtown Columbia is attracting companies with brand-new facilities and top-of-the-line safety features, all set within a truly connected “live-work-play” ecosystem centered around health, wellness, and community.

“Downtown Columbia has experienced dynamic growth over the past few years, with nearly two million square feet of new development in the Merriweather District,” said Fitchitt. “Following the strong leasing velocity demonstrated by Juniper, the Merriweather District’s first residential product, we broke ground on Marlow, marking the district’s largest multifamily to date at 510,000 square feet and solidifying its next phase of growth. Marlow places tenants in the center of the Merriweather District’s walkable neighborhood with its exciting retail, innovative office space, range of housing options, and restaurants such as Busboys & Poets which has become an anchor for the ongoing extensive programming and community events in Color Burst Park.”

At full build-out, the redevelopment of Downtown Columbia will include 14 million square feet of new development on 391 acres of land. The Merriweather District will make up 4.9 million square feet of the total mixed-use development, concentrated on 35 acres set within the 100 acres of forests, streams, and restored wetlands, with the storied music venue Merriweather Post Pavilion anchoring the cultural vibrancy of the growing district.

CareFirst will design and custom-build their office workplace interiors in 2023 and open in January 2024.

CareFirst was represented in the transaction by Phil Leibow and Mike Sullivan from JLL. Howard Hughes was represented by Alex Hancock and Patrick Crilley from Transwestern.

More information on leasing in the Merriweather District and at 6100 Merriweather, which has 10,000 square feet of office plus additional retail space remaining for lease, can be found at officesatdtc.com/6100-merriweather.

A development of The Howard Hughes Corporation®, Downtown Columbia is located at the center of Columbia, MD, one of the first master planned communities in the U.S. founded by legendary developer James W. Rouse in 1967. Conveniently located between Washington, DC and Baltimore, Columbia comprises 14,000 acres including ten completed residential villages and a deep pipeline of commercial development opportunities within its downtown. The underdeveloped core of Columbia became the subject of an extensive five-year process that culminated with the passage by the Howard County government of the Downtown Columbia Plan in 2010, a guide to creating a vital area in which residents can live, shop, work, entertain, exercise, and enjoy cultural opportunities in an enriched natural setting. At full buildout, the redevelopment of Downtown Columbia will include three new and reconfigured neighborhoods—Merriweather District®, Lakefront District and Central District featuring more than 14 million square feet of residential, office, hotel, retail, cultural, and public uses including public parks, trails and more. Among its numerous rankings citing safety and outstanding lifestyle, Columbia was recently ranked by WalletHub as the #1 City in America offering a high-paying job and top quality of life.

About The Howard Hughes Corporation®

The Howard Hughes Corporation owns, manages, and develops commercial, residential, and mixed-use real estate throughout the U.S. Its award-winning assets include the country’s preeminent portfolio of master planned communities, as well as operating properties and development opportunities including: the Seaport in New York City; Downtown Columbia®, Maryland; The Woodlands®, The Woodlands Hills®, and Bridgeland® in the Greater Houston, Texas area; Summerlin®, Las Vegas; Ward Village® in Honolulu, Hawaiʻi; and Douglas Ranch in Phoenix, Arizona. The Howard Hughes Corporation’s portfolio is strategically positioned to meet and accelerate development based on market demand, resulting in one of the strongest real estate platforms in the country. Dedicated to innovative placemaking, the company is recognized for its ongoing commitment to design excellence and to the cultural life of its communities. The Howard Hughes Corporation is traded on the New York Stock Exchange as HHC. For additional information, visit www.howardhughes.com.