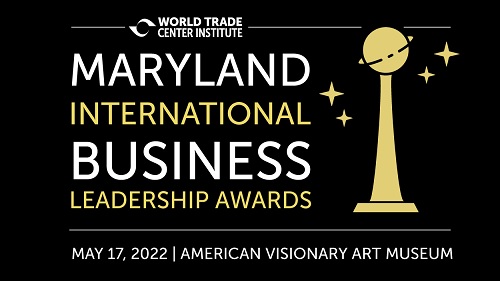 The winners have helped lead Jhpiego, Gensler, Zerofox, Rhee Bros, Inc., Medifast, Federal Resources and Keffa Coffeeto being among the most successful businesses and recognized brands in Maryland and worldwide.Photos and videos related to each award winner can be found here.

Governor Larry Hogan presented the Governor’s International Leadership Award to Jhpiego President and CEO Leslie Mancuso. Among the reasons why Mancuso was chosen for the award are that she is fearless in disrupting the status quo and believes passionately that health is a human right. Mancuso has led Jhpiego, an international health organization affiliated with The Johns Hopkins University, since 2002.

“Every year, these awards afford us the opportunity to recognize the indelible contributions of exemplary leaders who have made a positive impact here in Maryland and around the globe,” said Governor Larry Hogan. “Dr. Mancuso and all of this year’s winners are passionately committed to their work and have helped solidify the state’s reputation as an influential business hub. I extend my congratulations to them and their families.”

The Global Visionary Award was presented to Gensler Co-CEO Diane Hoskins. She is known for such things as advancing social equity, breaking barriers and creating spaces that enhance the human experience. Gensler is the world’s largest architecture firm and Gensler has been a Co-CEO there since 2005.

“Maryland is home to some of the most innovative, diverse and forward-thinking businesses in the world,” said WTCI Co-CEO Eddie Resende. “Their steadfast leaders helped get them there and serve as role models for so many people in Maryland and beyond who want to drive growth and global good.”

The World Trade Center Institute empowers people with ideas and connections so they can drive growth and global good.We focus on  existing and emerging global business leaders in the Mid-Atlantic – from high school students to executives in the C-Suite – whose work touches people in the United States and countries around the world.Our network includes 3,500+ companies and hundreds ofacademic institutions, government agencies and nonprofit organizations, making it the largest network of global businessesin the Mid-Atlantic. We host events, offer fellowships and curate global exchanges. For more information onWTCI, go to www.wtci.org.