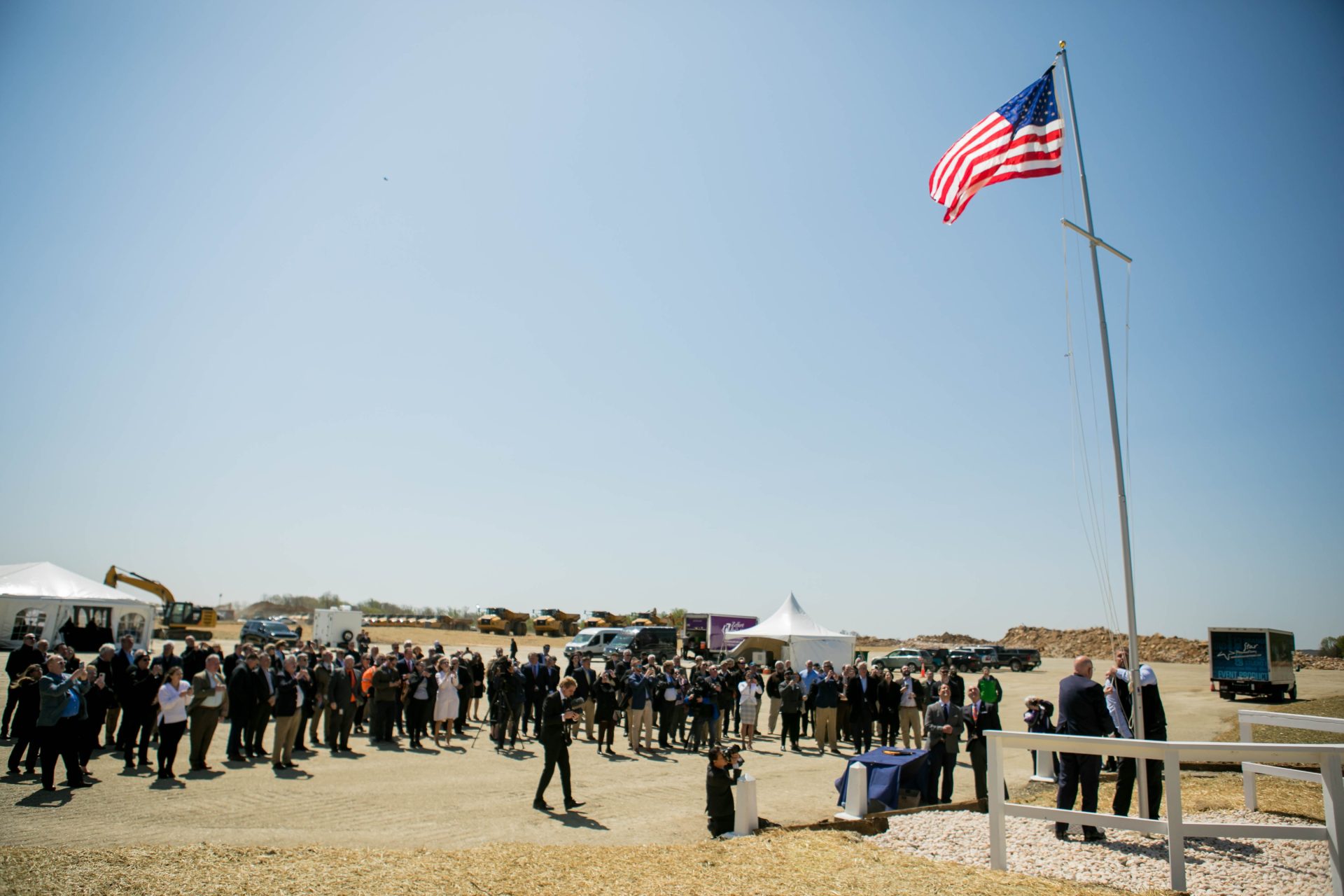 Official Flag Raising Ceremonies were recently held for Bainbridge Logistics Center, signaling the reactivation of the former Bainbridge Naval Training Center and the commencement of development activities for Phase I delivering up to 3.7 million square feet of logistics and distribution space across 440 acres. The site is being developed through a joint venture partnership between MRP Industrial, a Baltimore-based commercial real estate and investment company, and Hillwood Development Company, LLC, a Dallas-based real estate development and investment group. At full build-out, upwards of2,000 new jobs could be supported at the site, depending on the specific requirements of end-users. 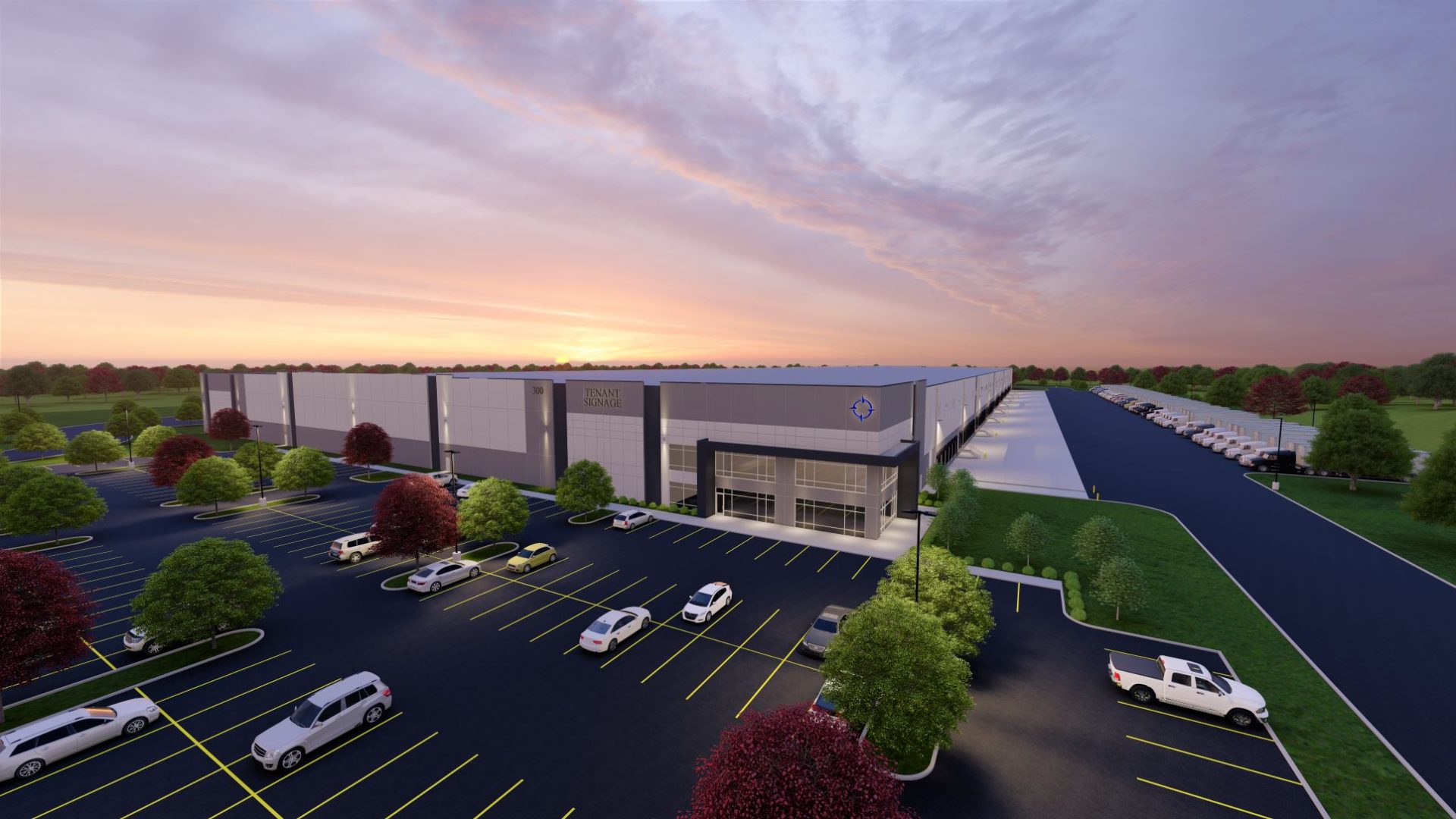 Established in 1941, the United States Naval Training Center, Bainbridge served as one of three major introduction centers for naval recruits, with a campus built to accommodate 20,000 servicemen. The center was named in honor of Commodore William Bainbridge, a former commander of the USS Constitution and founder of the first naval training school. Over the next three decades, under the direction of the Fifth Naval District, Bainbridge functioned as an active Naval training center, preparing over 250,000 recruits for the US Navy. In 1976, the property was secured and decommissioned by the US Navy. In February of 2000, Bainbridge was formally transferred to the State of Maryland and the Bainbridge Development Corporation was formed by the Maryland General Assembly to facilitate a transfer to the private sector to spur new economic development opportunities.

Now, over forty years after the Navy’s decommissioning Bainbridge’s gates will once again be opened as the former 1,100-acre Training Center is transformed into a world class logistics campus and economic engine for Maryland, Cecil County, and Town of Port Deposit. 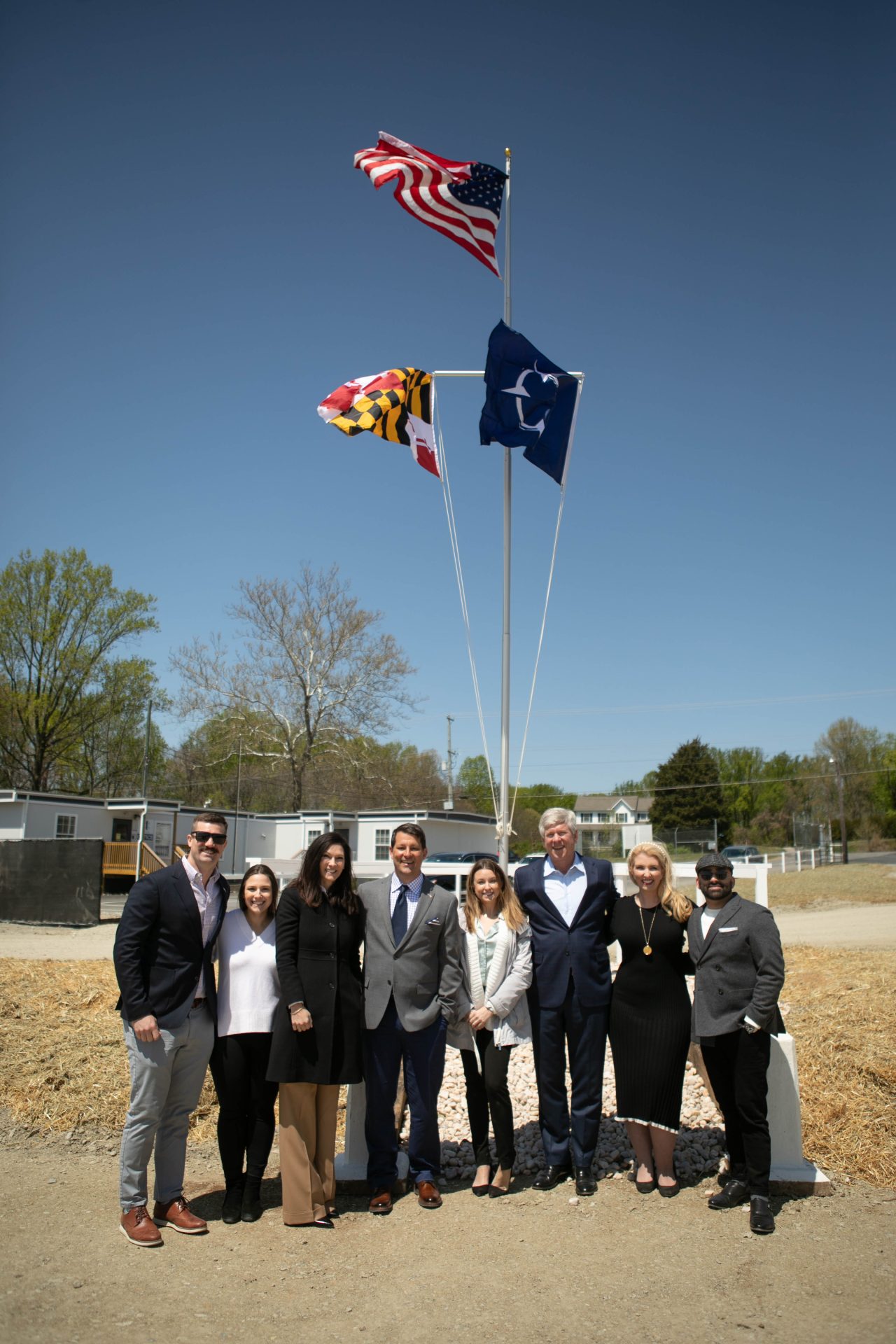 “Bainbridge Logistics Center is the result of a collaborative effort among the State of Maryland, Bainbridge Development Corporation, Cecil County, and the Town of Port Deposit.The park will serve as a national model for smart growth development strategies, the result of thoughtful real estate planning and public private partnerships working together to achieve a common goal,” explained D. Reid Townsend, Principal of MRP Industrial. “Our team approach with all stakeholders ensured a master plan that matches the region’s long-term vision, is sensitive to the environment and will satisfy the strong demand among end-users for both local and regional logistics requirements. Driven by the enhanced ecommerce habits of the American consumer and next-day delivery expectations, demand has outpaced supply in this product type, and Bainbridge Logistics Center can fill a pressing need for companies looking for ready access to several major metropolitan areas. Our plan will also generate a valuable tax base and broad range of employment opportunities to the residents of Cecil County.” 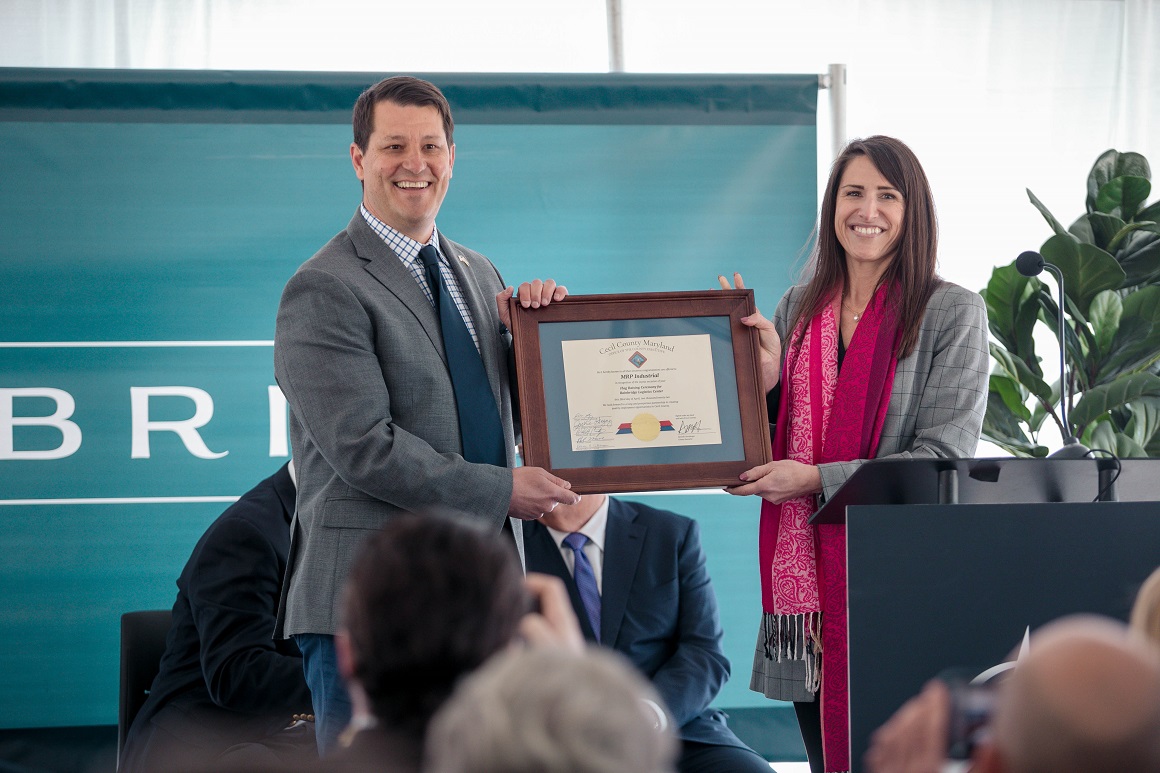 The initial phase of the project includes the private investment in more than $30 million of infrastructure improvements which will be dedicated to Cecil County and Town of Port Deposit upon completion in fall 2022. Public improvements include the expansion of both water and sanitary services engineered to support both Bainbridge and the surrounding community. Park infrastructure also includes the construction of approximately three miles of public roads to connect the park to the three state highways surrounding the perimeter of the formal Naval Training Base. In partnership with the Maryland Department of Natural Resources, the development team has also dedicated 96 acres into a permanent Forrest Conservation easement further enhancing the park like setting throughout the future logistics campus.

Later this spring, the site will be mass graded to pad ready condition and speculative construction will commence on the first two of four planned buildings on the site – totaling 1,026,000 square feet and 605,280 square feet respectively. These two single-story speculative Class “A” warehouse logistics buildings are projected to deliver in the first quarter of 2023. 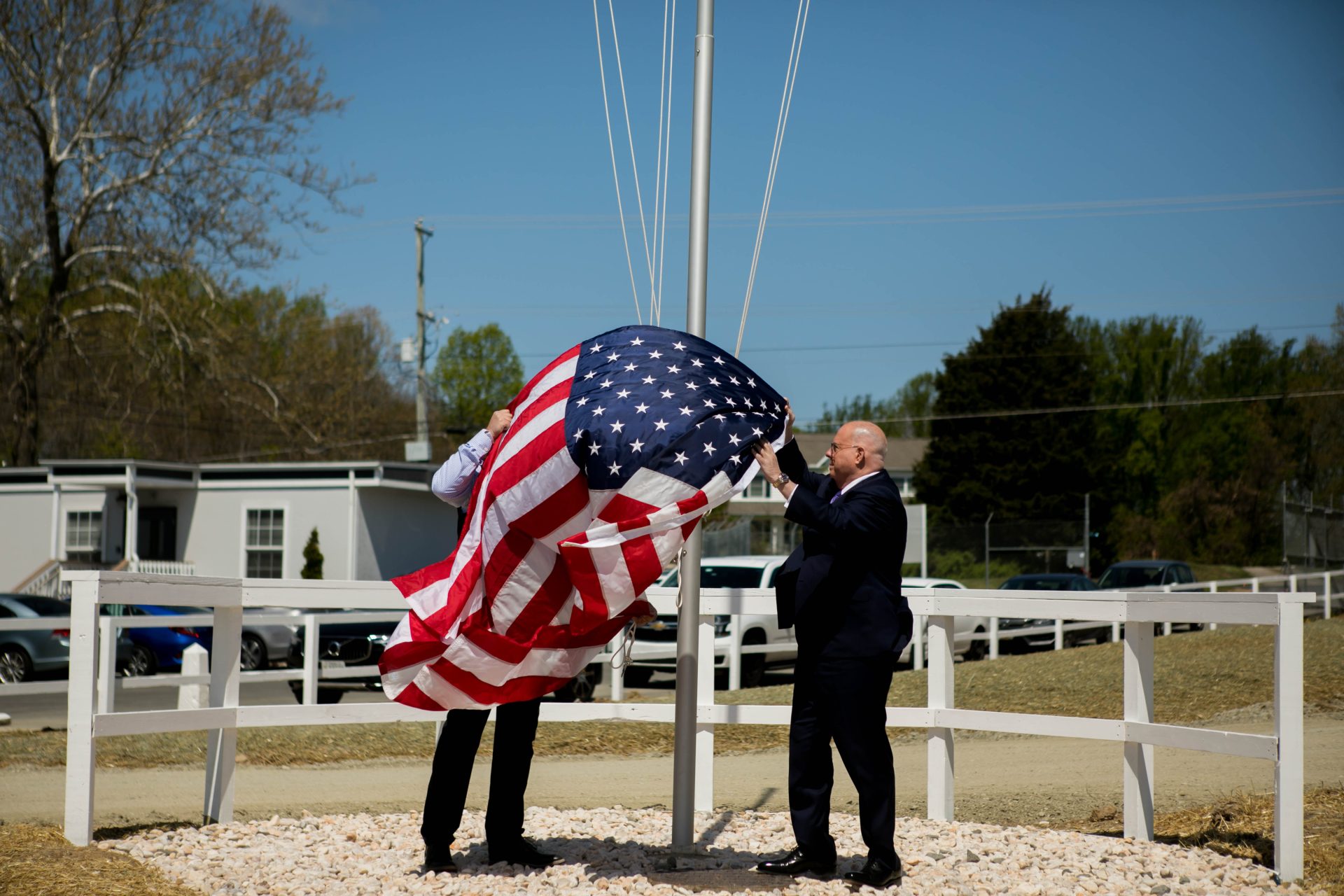 Each building is designed to achieve LEED ® Certification with LED lighting, white reflective roofs, and other energy saving features. Both sites feature deep truck courts to support the movement of large tractor trailers, and segregated parking fields for employee and visitor parking. The large, open space floorplates are suitable for a range of light manufacturing, warehouse, logistics and last-mile operations and can accommodate single and multi-tenant uses.

The site is ideally located only three miles from Interstate 95. Approximately 50 percent of the United States population can be reached within a 24-hour truck drive from Bainbridge, and the site has overnight access to 90 million people, representing one-third of the nation’s effective buying power.

Companies that lease space at Bainbridge Logistics Center can take advantage of a robust set of incentives, including the Cecil County Enterprise Zone property and income tax credits, StateSales and Use Tax Exemption for construction materials, warehousing and manufacturing equipment and the Foreign Trade Zone.

Bohler Engineering and G.W Stephens & Associates partnered as the project’s civil engineer. MacGregor Associates will serve as the project Architect. The Conlan Company has been selected as the General Contractor supported by site contractor DXI Construction.

“The entire mission of our state government continues to be keeping Maryland open for business, and today represents the culmination of literally decades of effort to do just that as we officially kick off the redevelopment of more than 400 acres of land in this key location along the I-95 corridor,” said Maryland Governor Larry Hogan. “There is a major distribution and logistics market in this region, and the development of Bainbridge will be a tremendous asset and help us continue to meet the need for more and more companies seeking to do business in our state.”

“Available warehouse space is at a premium, and with help from this Bainbridge project, Maryland can continue to provide in-demand facilities for companies seeking out a location in our state,” said Maryland Commerce Secretary Mike Gill. “We look forward to watching this development continue its transformation and the economic impact it will bring to the surrounding area.”

According to CBRE’s First Quarter 2022 industrial market report, robust leasing activity in 2021has produced a 5.1% vacancy rate in the Harford/Cecil County submarket which includes approximately 35.2 million square feet of space. In the larger Baltimore North I-95 Corridor, an area encompassing Baltimore City Southeast, Baltimore County East and all of Harford and Cecil counties, more than 11 million square feet of industrial space was leased last year and rents for Class “A” space rose by 25.5%.

Changes in consumer shopping habits fueled by the pandemic resulted in US ecommerce sales eclipsing the $1 trillion mark, which marks an all-time high, a trend that had been edging up over the past five years but which accelerated dramatically over the past 18 months. Real estate experts now believe that shopping patterns have permanently changed, and according to information released by the US Census Bureau, more than 13 percent of all retail purchases now come via digital orders.

Over the next five years, nearly 1.5 billion square feet of logistics space will be added to the worldwide inventory of space in response to the surge in e-commerce, according to CBRE.

CBRE has been selected as the exclusive leasing broker for this leasing requirement, with Bill Pellingtonand Toby Minkhandling the assignment.

Founded in 2013, MRP Industrial MRP Industrial is considered among the most active developers across the Northeast, having developed 45buildings comprising nearly 20million square feet of space. The company also maintains a future development pipeline consisting of 1,100 acres, with the ability to develop approximately 10.4 million square feet of space. For more information visit www.mrpindustrial.com

Hillwood Development Company has developed or acquired nearly 210 million square feet of high-quality industrial and logistics properties across the United States, United Kingdom, Canada and Europe since its inception by Ross Perot, Jr. in 1988. Combining proven real estate experience with the private entrepreneurship of the Perot family, the company offers the capital, resources and insight to buy and build industrial properties that meet the logistics and distribution demands of evolving markets. Hillwood’s portfolio includes all major categories of industrial real estate in a variety of distribution centers, e-commerce facilities, last-mile logistics centers and freight terminals. For more information, visitwww.hillwood.com