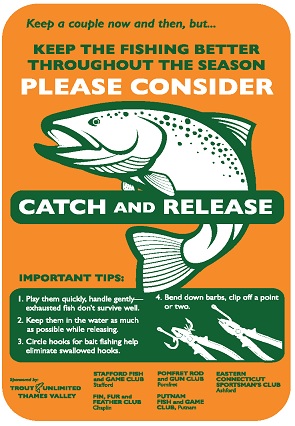 You may see some colorful new signs at popular fishing access sites in the northwest part of the Quiet Corner in the next few weeks.

The Thames Valley Chapter of Trout Unlimited, with the support of local sportsmen’s clubs, are launching a campaign to encourage more catch and release fishing.

Gary Lussier, President of the Thames Valley Chapter of TU, offers, “The intent is not to discourage people who like to enjoy a fresh trout now and then (who doesn’t?) but to raise awareness of the benefits of catch and release with minimal harm to the fish.”

Figures from Andrew Bale of the DEEP show about 120,000 freshwater licenses and permits being issued. This includes about 80,000 trout stamps. Plus who knows how many younger kids who don’t’ need licenses. At the same time the state stocks about 500,000 catchable size trout annually.

According to Steve Gerling, coordinator of the project: “Fishing provides a truly great opportunity to enjoy the best of the outdoors But with those numbers it’s not hard to see why the lakes and streams can be quickly depleted of trout when many people keep their entire catch at every outing.”

He continues, “The main message of the campaign is that more catch and release will yield better fishing for more of the season. Especially in the case of trout, this also increases the possibility of more “holdover” fish and ups the chances for natural reproduction in our lakes and streams. The signs give tips on how to minimize injury to your catch, and will even have a small pair of pliers attached for those who wish to bend down hook barbs at waterside.”