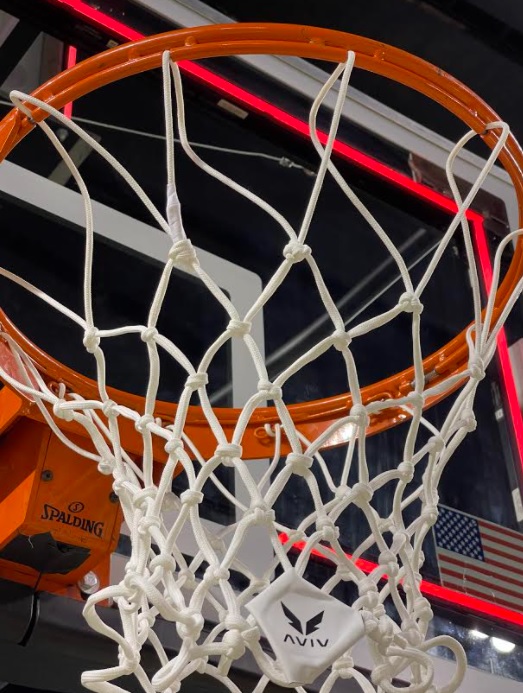 Aviv, a Baltimore-based sports innovation and apparel company, creator of the first-ever moisture wicking and antimicrobial basketball net, was selected as the official net provider for the Central Intercollegiate Athletic Association (CIAA) Tournament.  The CIAA is the oldest historically Black athletic conference in the country.

The nets  were used in the national mens and womens basketball tournament taking place for the first time in Baltimore this past week. This marked history for both the CIAA and Aviv, with the CIAA becoming the first college league to use the Aviv Nets in game play.

Aviv’s moisture wicking and antimicrobial net technology dramatically reduces sweat, moisture, bacteria and germs from the ball the second it meets the net — allowing players to stop worrying about slippage and getting back to the game. The Aviv Net employs innovative, patent-pending technology, proven to absorb up to 10 times as much moisture as a traditional nylon net. This offers athletes a completely new experience when playing the game of basketball, decreasing the risk of transmitting harmful bacteria and the ability to play with a far less slippery ball than usual, ultimately improving ball handling and shooting.

“This is an exciting milestone for us! Having the Aviv Net used at this monumental tournament is validation that our nets are superior to others and provide enhanced performance for players,” stated Aviv’s founder and former professional basketball player, Tamir Goodman. “We are grateful that we are able to support our hometown and keep more than 200 hundred players safe with the Aviv Net.  We have received overwhelmingly positive feedback from the athletes and are excited for our continued growth as we finalize additional partnerships around the world.”

CIAA players used the Aviv Net since practice began, experiencing first-hand the benefits the nets provide. The Aviv Nets were used for the remainder of the tournament, with a ceremonial cutting of the net during the championship round on Saturday. This was revolutionary for tournament players as they no longer needed to handle a gross and slippery ball, which allowed them to play smarter, safer and better.

“Going into the tournament, we were already anticipating watching exciting games since we have such a talented line of HBCU teams,” said Breon Hagans, the Associate Commissioner of the CIAA. “The Aviv Net elevates the games to another level for our athletes and allows them to focus on playing and not worrying about the ball slipping from their hands, keeping the focus on the court. We are fortunate to have such an innovative company in our industry that is focused on improving the game for the better.”

The Aviv Net was used in its first professional basketball game during the FIBA Basketball Champions League game between Turkey and Jerusalem on October 5, 2021. Thon Maker, one of the top players for Jerusalem, was particularly impressed with the net’s impact on his gameplay. “I loved this net and definitely noticed a difference.”

Aviv was created to reimagine and revolutionize sports equipment. Founded by a former professional athlete, coach and entrepreneur, Aviv strives to innovate and evolve sports to move the world forward, with equipment engineered to work better for players, teams, and leagues. The evolution of the net is a huge milestone in both the basketball and sports equipment industry, as the traditional basketball net has not changed in over 130 years, though the game itself has evolved significantly during that time.

Founded in 1912, the Central Intercollegiate Athletic Association (CIAA) is the first, and longest running, African American athletic conference in the U.S. and one of the most recognized conferences in Division II. The CIAA conducts 14 championships attended by more than 150,000 fans from around the country. In 2020, the conference celebrates the special 75th anniversary of its Championship Basketball Tournament – an event that has become a must-see in the African American community. The Basketball Tournament has been honored as a 2019 Champion of Economic Impact in Sports Tourism by Sports Destination Management, the leading publication with the largest circulation of sports event planners and tournament directors in the sports tourism market, for both 2018 and 2019.