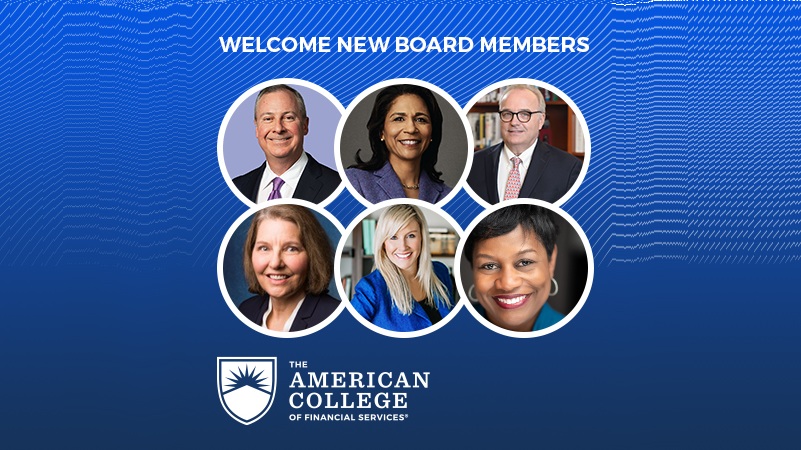 King of Prussia, PA, Feb. 17, 2022 (GLOBE NEWSWIRE) — The American College of Financial Services announced a pair of newly elected officers to its Board of Trustees, with John Howard selected as the Board’s new chair and Salene Hitchcock-Gear, JD, voted in as vice chair. The two executives are joined by new Board members Dr. Wallace Boston, Lt. Gen. Michelle D. Johnson (USAF-ret), Cheri Lytle, and Kristi Martin Rodriguez who collectively bring decades of financial services and leadership experience, and their expertise will support The College as a trusted source of applied financial knowledge and education.

“I’m excited to welcome our new Board members and celebrate the developing roles of our new chair and vice chair who will continue to guide The American College of Financial Services on our mission to be a trusted voice in a world that needs it now more than ever,” says George Nichols III, President and CEO at The American College of Financial Services. “As we embark into a new year, the leadership of distinguished professionals like John and Salene will help us in our goal to provide applied financial knowledge and education to everyone who needs it. We are committed to helping the people of our nation lead lives of financial wellness, supported by financial professionals with the expertise to lead them.”

John Howard is chairman and chief executive officer of Truist Insurance Holdings. He also serves as chief insurance officer for Truist Financial Corporation and is a member of the Truist Executive Leadership team. An alumnus of Columbia University and Duke University and a U.S. Navy veteran, his three decades of financial services experience began at Alex. Brown & Sons, followed by positions of increasing responsibility at GE Capital. He later served as president of retirement services for Conseco and, following that, president of Prudential Select Brokerage.

Howard currently serves as executive sponsor of the SERVE (Supporting Emergency Responders & Veterans Engagement) Business Resource Group at Truist. He is vice-chairman of The Institutes; chairman of advocacy for The Council of Insurance Agents and Brokers; and an overseer of the Maurice R. Greenberg School of Risk Management, Insurance and Actuarial Science at St. John’s University. Additionally, he is a prior chairman of the Board of Trustees of Gill St. Bernard’s School and a recipient of the Hall of Fame Award from the Tri-County Scholarship Fund.

“It’s an honor to lead the Board of The American College of Financial Services in fulfilling its commitment to student success, providing relevant course material, and discovering new solutions for financial security,” Howard says. “The College delivers the highest quality education to the professionals entrusted with the public’s financial well-being, and I’m proud to be a part of this institution.”

Salene Hitchcock-Gear, JD, is president of Prudential Individual Life Insurance, leading the unit offering competitive solutions to meet the needs of consumers via a diverse portfolio of life insurance products. An industry veteran with more than 30 years of experience, Hitchcock-Gear joined Prudential in 2017 as chief operating officer of Prudential Advisors, the company’s national sales organization with more than 3,000 financial professionals, advisors and fee-based financial planners who offer clients a broad range of financial solutions. She was appointed president of both businesses in 2018. Previously, Hitchcock-Gear served as president and CEO of Ameritas Investment Corp. and president and CEO of Acacia Life Insurance Company. She represents Prudential as a director on the Women Presidents’ Organization Advisory Board, serves on the Board of Trustees of The American College of Financial Services, and sits on the Life Insurance Committee of the American Council of Life Insurers. Hitchcock-Gear is an alumna of the University of Michigan and New York University School of Law, holds FINRA Series 7 and 24 securities licenses, and is a member of the New York State Bar Association.

Dr. Wallace E. Boston was appointed President and Chief Executive Officer of American Public University System (APUS) and its parent company, American Public Education, Inc. (APEI) in July 2004. In September 2019, he retired as CEO of APEI, and he retired as APUS President in August 2020. During his tenure as president, APUS grew to over 85,000 students, 200 degree and certificate programs, and approximately 100,000 alumni. In his career prior to APEI, and APUS, Dr. Boston served as either CFO, COO, or CEO of Meridian Healthcare, Manor Healthcare, Neighborcare Pharmacies, and Sun Healthcare Group. Dr. Boston is a Certified Public Accountant, Certified Management Accountant, and Chartered Global Management Accountant. He earned an A.B. degree in History from Duke University, an MBA in Marketing and Accounting from Tulane University’s Freeman School of Business Administration, and a Doctorate in Higher Education Management from the University of Pennsylvania’s Graduate School of Education.

Lt. Gen. Michelle D. Johnson (USAF-ret) is a transformational leader with over 30 years of success leading complex organizations on a national and global stage. Most recently, she served as senior vice president and head of referee operations for the National Basketball Association. She served with distinction in various assignments during her three decades in the U.S. Air Force and is the first woman cadet wing commander to lead the U. S. Air Force Academy as the 19th superintendent—equivalent to a college president. Before becoming superintendent, Johnson spent time as NATO’s Deputy Chief of Staff for Operations and Intelligence (2011-13) and served stints at the Pentagon as the Air Force’s Deputy Director for Information and Cyberspace Policy (2007-09) and Director of Public Affairs (2005-07). A command pilot with more than 3,600 flight hours, she was the Air Force aide to Presidents George H.W. Bush and Bill Clinton from 1992-94. She was the Air Force’s first woman cadet wing commander, first female Rhodes Scholar (1981-83) and first female inductee into the coSIDA Academic All-America Hall of Fame (2007).

Kristi Martin Rodriguez is senior vice president of the Nationwide Retirement Institute (NRI) where she reports directly to the Nationwide Financial President and COO. She advises executive leadership to successfully expand service offerings, accelerate business growth and align strategic objectives with key organizational goals. Over her 20+ years of experience, Rodriguez has held various positions in the highly regulated healthcare and financial services industries, spending seven years with Nationwide and previously holding roles with Aetna and UnitedHealth Group. She is a graduate of Hampton University and holds a certification in Consumer Marketing from Northwestern University’s Kellogg School of Management Executive Education.

ABOUT THE AMERICAN COLLEGE OF FINANCIAL SERVICES

The American College of Financial Services was founded in 1927 and is the nation’s largest nonprofit educational institution devoted to financial services. Holding the highest level of academic accreditation, The College has educated one in five financial advisors across the United States and offers two master’s degrees in management and financial services, along with prestigious financial planning designations such as the Retirement Income Certified Professional® (RICP®), Chartered Life Underwriter® (CLU®), Wealth Management Certified Professional® (WMCP®), Chartered Advisor in Philanthropy® (CAP®), Chartered Special Needs Consultant® (ChSNC®), Chartered Financial Consultant® (ChFC®), and education leading to the Certified Financial Planner™ (CFP®) certification. The College’s faculty represents some of the foremost thought leaders in the financial services profession. Visit TheAmericanCollege.edu and connect with us on LinkedIn, Twitter, Instagram, Facebook, and YouTube.