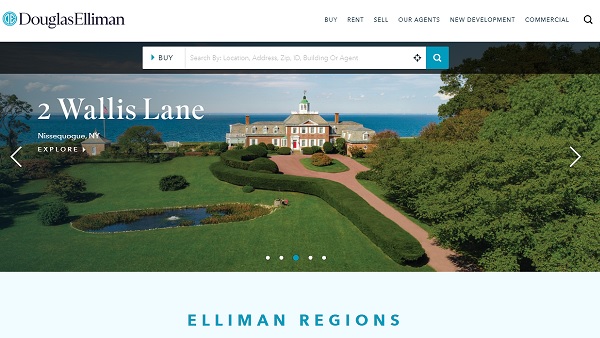 On March 4th, Douglas Elliman, one of the largest independent residential real estate brokerages in the United States, announced the winners of the 2021 Ellie Awards, which honor the firm’s top performing agents throughout the nation for 2020. Top performers from New York City, including Manhattan and Brooklyn, were among the honorees this year.

Nationwide sales for Douglas Elliman in 2020 totaled $29.6 billionas the company continued its nationwide growth into new markets. The firm was responsible for 46,303 sales and rental transactions.

In 2020, the firm broke the record in Brooklyn for the most expensive home ever sold with a Brooklyn Heights townhouse, which closed for $25.5 million. Notable deals in Manhattan included two top penthouses at Madison Square Park Tower for $45 million, a penthouse at 150 Charles for $40 million, a penthouse in Soho at 421 Broome Street for $35 million and a penthouse at Renzo Piano’s 565 Broome for $22 million.

“Even in unprecedented times, our agents continued to perform at the top of the market in New York Citydue to their hard work and determination,” said Steven James, President and CEO of Douglas Elliman New York City. “We are excited to celebrate their talents and success and look forward to their tremendous achievements that 2021 will undoubtedly bring as well.”

The inaugural Elliman Icon Award was presented to Fredrik Eklund, John Gomes and Julia Spillman of the Eklund | Gomes Team in honor of their 10 extraordinary years at Douglas Elliman.

Earning first place for Top Teams by Gross Commission Income (GCI) in Manhattan was The Holly Parker Teamout of the 690 Washington office. Taking home this year’s #1 spot for Top Individuals by GCI was Jennifer Kalish, who is based out of the1995 Broadway office.

Additional Top Teams by Transactions were The Tavivian Team (#2), The Shemesh Team (#3), The Rosa Pereira Team (#4) and The Holly Parker Team (#5).

For Manhattan, the Top Retail and Commercial Award by GCI and units was given to The Dana Commercial Team (#1) followed by The Puopolo Team (#2).

The MindreauTeamwas named the firm’s Top Rental Team by Transactions in Manhattan and were followed by The Rothman Team andThe Sicari Team (tied #2), AltschulerBartolucci Team (#3), The Steiner Team (#4), The Hamersley Team and The Leibowitz Team (tied #5).

The Azaria Team (#4) and TheTavivian Team and The Leibowitz Team (tied #5).

Keyan Sanai based outof the 575 Madison Avenue office, was named the firm’s Top Rental Individual by Transactions in Manhattan. He was followed by Janna Raskopf (#2), Andrea Anzaldo (Weksler) (#3), Jonathan Aka (#4) and Jessica Wolf (#5).

Additional awards included DE Title Services for Manhattan, which went to NazilaJarrahian and The Outgoing Broker to Broker Referral Awardwent to Michael Lorber,followed by Noble Black and Diana Arias who tied for number two.

A Lifetime Achievement Award was presented to Belinda Brackenridge of Manhattan’s 575 Madison Avenue office for her career-long contributions to the business, and Peco (Pete) Angjeleski and Dana Romita tied for Rookie of the Year for Manhattan.

The Top Team by Transactions in Brooklyn also went to The Scott / Robles Team. They were followed by The Peters Breese Team (#2), The Maroni Team (#3), The Rebecca Goldberg Team (#4) and AltschulerBartolucci Team (#5).

The number one spot for Top Individuals by Transactions in Brooklyn was awarded to Robert Nicoletti of the 187 7th Avenue office, followed by Bren Salamon (#2), Rebekah Carver (#3), Daniel Soldano (#4) and GavrielIlyabayev (#5).

Christina Kremidas, based out of the 664 Fulton Street office, took home Elliman’s Rookie of the Year award for Brooklyn.