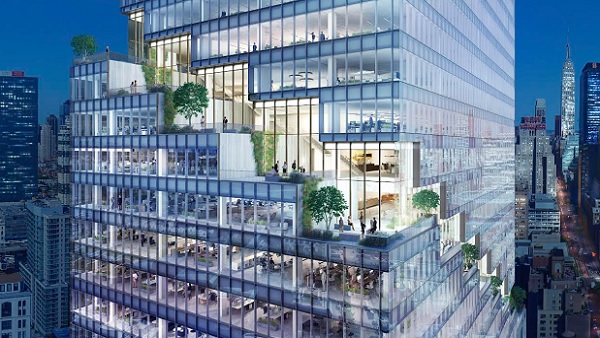 Tishman Speyer’s 1,031 Foot Manhattan Office Tower Wrapped by a Cascading Series of Terraces Is 54% Leased One Year Prior to Completion

Tishman Speyer, one of the world’s leading developers, owners, operators and asset managers of first-class real estate, today announced that Turner Construction Company will relocate its global headquarters and New York office to The Spiral, its 65-story office tower currently under construction at 66 Hudson Boulevard in Manhattan.

Turner Construction, an international construction services company and a leading builder in diverse market segments, will occupy 75,000 square feet across the entire third floor of The Spiral as part of a 13-year lease.  Turner, whose staff of 10,000 global employees completes $12 billion of construction each year, is serving as Tishman Speyer’s General Contractor on The Spiral. 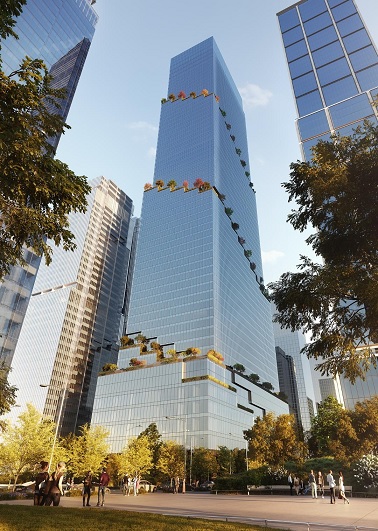 “Turner has been an incredible partner as we built The Spiral, introducing technology, safety and workforce innovations that have made it a new standard for modern office development,” said Tishman Speyer President and CEO Rob Speyer.  “Given all of the office towers Turner is constructing around the world, we are very honored they have chosen The Spiral as their new home.”

“We are excited to be moving our world-wide headquarters and New York City office to 66 Hudson Boulevard. The Spiral, a project we are currently building, will provide us with an environment that so well defines our vision and the future of our company,” said Peter Davoren, President and Chief Executive Officer of Turner Construction Company. Davoren continued, “The highly sustainable, technologically advanced building offers a range of people-focused amenities that will support the connectivity of our teams and offer a healthy environment for employees and guests.”

Tishman Speyer has now successfully pre-leased 54 percent of the 2.8 million square foot office tower.  In addition to Turner Construction, Pfizer, one of the world’s pre-eminent biopharmaceutical companies, will relocate its global headquarters to 746,000 square feet in The Spiral. Premier law firm Debevoise & Plimpton LLP has committed to 531,000 square feet while AllianceBernstein has pre-leased 166,000 square feet.

Designed by BIG-Bjarke Ingels Group, The Spiral rises to 1,031 feet and features a cascading series of landscaped terraces and hanging gardens as its signature element.  The terraces will ascend, one per floor, in a spiraling motion to create a unique, continuous green pathway that wraps around the façade of the tower and supplies occupants with readily accessible outdoor space.  Construction completion and initial occupancy of the tower is slated for the second half of 2022.

Located at the intersection of the High Line and the four-acre Bella Abzug Park, The Spiral encompasses an entire city block stretching from West 34th to West 35th Streets and from 10th Avenue to the park.  The six-story base of the building will include a lobby with ceiling heights of up to 28 feet and entrances on Hudson Boulevard East and 10th Avenue.  The base also will include approximately 18,000 square feet of publicly accessible, first-class retail.

The Spiral is easily accessible from all five boroughs, Westchester County and New Jersey. It is in close proximity to New York’s most convenient transit hubs, including Penn Station, the Port Authority Bus Terminal, Midtown Ferry Terminal, Lincoln Tunnel and West Side Highway. The 7 Train is just steps away and three stops from Grand Central Terminal.

A CBRE project team of Mary Ann Tighe, Rob Hill, Brendan Herlihy and Elliot Bok served as advisors to Turner on the transaction.  Tishman Speyer was represented by its in-house leasing team.

Tishman Speyer is a leading owner, developer, operator and investment manager of first-class real estate in 30 key markets across the United States, Europe, Asia and Latin America. We develop, build and manage premier office, residential and retail spaces for industry-leading tenants, as well as state-of-the-art life science centers through our Breakthrough Properties venture. With global vision, on-the-ground expertise and a personalized approach, we are unparalleled in our ability to foster innovation, quickly adapt to global and local trends and proactively anticipate our customers’ evolving needs.  By focusing on health and wellness, enlightened placemaking and customer-focused initiatives such as our tenant amenities platform, ZO., and our flexible space and co-working brand, Studio, we tend not just to our physical buildings, but to the people who inhabit them on a daily basis. Since our inception in 1978, Tishman Speyer has acquired, developed, and operated 484 properties, totaling 219 million square feet, with a combined value of over $121 billion (U.S.). Our current portfolio includes such iconic assets as Rockefeller Center in New York City, The Springs in Shanghai, TaunusTurm in Frankfurt and the Mission Rock neighborhood currently being realized in San Francisco.