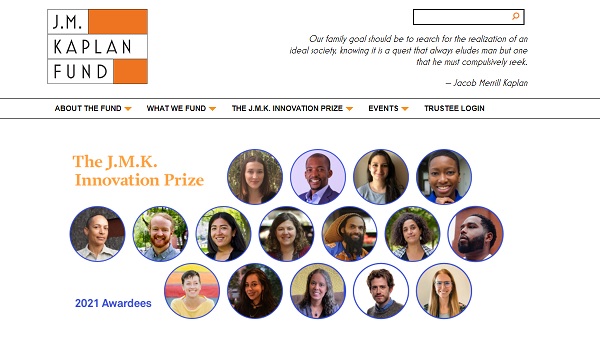 Among 10 Awardees Selected from 2,800+ Applications for Transformative Potential in the Fields of Social Justice, the Environment, and Heritage Conservation

Black Women Build – Baltimore, a home ownership and wealth-building initiative, has been awarded The 2021 J.M.K. Innovation Prize. From a nationwide search for transformative, early-stage projects, The J.M. Kaplan Fund awards the Prize biennially to ten innovators in the fields of social justice, the environment, and heritage conservation. Awardees receive a total of $175,000 over three years and participate in a learning collaborative designed to support their journey as change agents.

The J.M.K. Innovation Prize is designed to support nonprofit and mission-driven for-profit organizations tackling America’s most pressing challenges through social innovation—defined as those pilot projects, new organizations, or nascent initiatives that involve a certain amount of measured risk, but which may ultimately lead to large-scale, transformative results. This year’s awardees were selected from among 2,826 applications, by far the most participation in the Innovation Prize since its inception in 2015.

Black Women Build – Baltimore partners the renewal of marginalized urban neighborhoods with on-the-job training in construction work to make the American dream of homeownership widely achievable. The organization recruits Black women—the demographic group with the least amount of wealth in the United States—to rehabilitate and reclaim abandoned, neglected, and deteriorated houses through hands-on learning of carpentry, electrical, and plumbing skills. Project participants are then offered the opportunity to purchase an affordable home that they actually helped build. As a result, women not only gain the security of owning their own home and the skills to maintain their asset, but also develop proficiency in a marketable construction trade for an ongoing source of well-paid employment.

“It’s construction with an ethos around community,” says Shelley Halstead, the group’s founder and executive director. “You have that physical foundation of the house, and then you’re building the foundation of community with women who have worked together side-by-side.”

Black Women Build – Baltimore offers a model of urban revitalization, civic pride, and financial success for economically depressed and physically distressed communities across the country. “The J.M.K. Innovation Prize is a really great opportunity to expand the work that we’re doing,” Halstead adds. “I like to say that we build community with whom you work and where you live. If more folks had a vision about who would live there and what communities would look like, I think they would stop demolishing and possibly spend that money on rehabilitating these neighborhoods.”

Black Women Build – Baltimore is among several Prize winners committed to social-impact projects that integrate heritage conservation with community-building and racial justice. A report accompanying the Prize, Building Pathways to Collective Power, sheds further light on this trend and other findings from this year’s selection process and pool of 2,800+ applicants.

About The J.M. Kaplan Fund Established in 1945 by philanthropist and businessman Jacob Merrill Kaplan, the Fund has since its inception been committed to visionary innovation. Over its 75-year history, the Fund has devoted $280 million to propel fledgling efforts concerning civil liberties, human rights, the arts, and the conservation and enhancement of the built and natural worlds. The J.M.K. Innovation Prize continues the Fund’s legacy of catalytic giving, reaching across America to provide early-stage support for entrepreneurs with twenty-first-century solutions to urgent social and environmental challenges. Learn more atJMKFund.org.