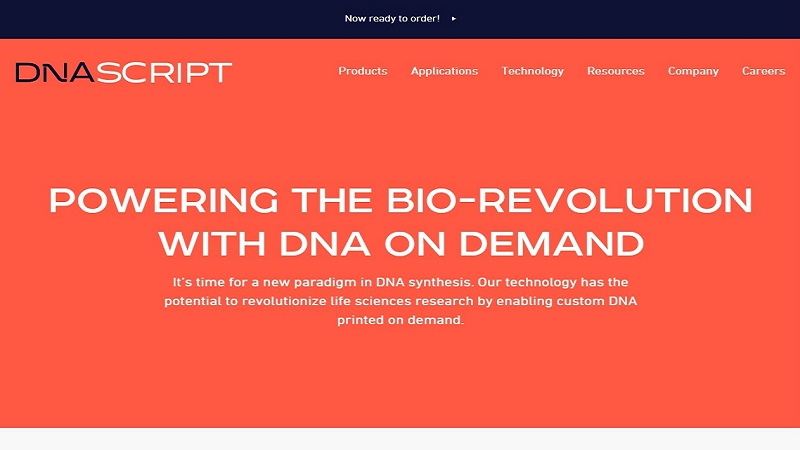 DNA Script announced last June the targeted release of the SYNTAX System, a benchtop instrument along with software, and reagent kits. The SYNTAX Platform provides in-house DNA printing – without using toxic organic chemicals or extended delivery wait times from third-party DNA service providers – for labs of all sizes. The fully automated instrument sets up in 15 minutes and within a few hours produces up to 96 oligos immediately ready for use in genomics and molecular biology research. The SYNTAX platform enables efficiency and control over workflows, making labs more productive to accelerate innovation.

“As we have seen with the success of COVID mRNA vaccines, we believe the next wave of life sciences will be an engineering and technology-based approach. We think DNA Script has changed the landscape with SYNTAX by replacing chemical processes with a plug-and-play technology that custom prints DNA on your lab bench,” said Aaron Weiner, Managing Director and Head of Healthcare at Coatue Management. “We believe DNA printers have the potential to become as ubiquitous as sequencers and microscopes.”

“DNA Script believes that the next industrial revolution will be driven by life science and biology, and we started the company with a vision to accelerate that bio-revolution, to drive life science breakthroughs by giving researchers same-day DNA access and control via EDS. Toward that end we launched the first instrument on the SYNTAX Platform earlier this year. The tremendous support we’ve received from the investment community validates our vision and will fuel our portfolio of continued innovation,” said Thomas Ybert, co-founder and CEO of DNA Script. “We’re excited to have such a strong syndicate of long-term investors that will help us grow the company, as we plan to aggressively expand the company by hiring over a hundred personnel. This expansion of talent and resources will enable us to execute on EDS technology’s promise and our ambitious goals to drive DNA-on-demand further on the path to revolutionize life science research as well as personalized medicine.”

Founded in 2014, DNA Script is a pioneering life sciences technology company developing a new, faster, more powerful and versatile way to design and manufacture nucleic acids. The company has developed an alternative to traditional DNA synthesis called Enzymatic DNA Synthesis, or EDS, allowing this technology to be accessible to labs with the first benchtop enzymatic synthesis instrument, the SYNTAX System. By putting DNA synthesis back in the lab, DNA Script aims to transform life sciences research through innovative technology that gives researchers unprecedented control and autonomy. www.dnascript.com.