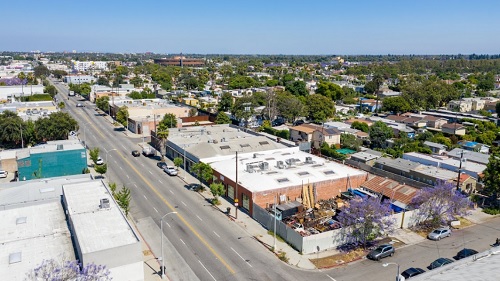 Mother, a creative agency with offices across London, New York, Los Angeles and Shanghai, will occupy 27,000 square feet at Fundrise’s single-story West Jefferson Boulevard properties. The company will expand its Los Angeles footprint from 5290 Washington Boulevard to the West Adams-based Fundrise buildings, which will span across three continuous creative office and retail spaces.

“Fundrise is thrilled to welcome Mother to West Jefferson,” said Fundrise Co-Founder and CEO Ben Miller. “Mother is well regarded as one of the top creative agencies in the world so we’re excited for them to pick one of the fastest growing neighborhoods in Los Angeles for their west coast headquarters. We think they’ll be a fantastic addition to West Jefferson and will serve as one of the primary anchors to a community that is on the cusp of a revitalization.”

“We have been set on West Adams since Mother first opened in Los Angeles. It’s a historic neighborhood that’s part of the fabric of the city,” said Romain Naegelen, Managing Director of Mother in LA. “As we keep growing our business and partnerships, 4216 W Jefferson is the perfect location for us to create a home for our expansion for years to come and connect with the local community.”

4206, 4212 and 4216 West Jefferson Boulevard is a 26,873 square feet retail and office and industrial facility located between West Boulevard and Hillcrest Drive. The buildings, originally constructed in 1951, collectively are undergoing renovation to be transformed into creative office and modern retail space that is set for completion in 2022. Fundrise previously purchased the properties back in 2019 and owns an additional portfolio of 18 sites within a few blocks of this location that include two mid-century warehouses, retail and commercial offices and a parking area. West Jefferson is a strategic long-term investment due the properties being well-suited for conversion for new creative workspaces, as well as being in the vicinity of Culver City that should bode well for housing and retail property demand.

Fundrise is America’s largest direct-to-investor real estate investment platform. Since 2012, our mission has been to use technology to build a better financial system for the individual. We make it easier and more efficient than ever for anyone to invest in institutional-quality private real estate—all at the touch of a button. To date, we’ve transacted over $5.7 billion worth of real estate, and currently manage approximately $1.5 billion in equity, on behalf of our more than 150,000 active investors. You can learn more about the future of real estate investing at Fundrise.com.