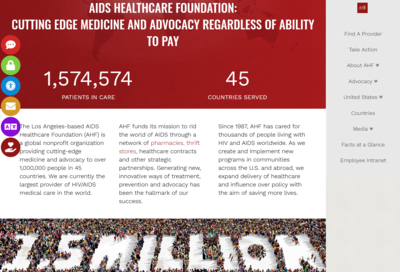 LOS ANGELES–(BUSINESS WIRE)–Even though transparency is an essential aspect of fighting infectious disease outbreaks, the head of the World Health Organization did not display or demand it when COVID-19 was first unleashed upon the world, says AIDS Healthcare Foundation. United Nations Member States must nominate and appoint a new WHO chief – one willing to set politics aside and insist that countries be 100% transparent when the health of the world’s population is on the line.

On January 3, 2020, there were 44 reported cases of a mysterious pneumonia in Wuhan, China. By the time the WHO had declared the COVID-19 outbreak a pandemic in March 2020, its Director-General Dr. Tedros Adhanom Ghebreyesus had downplayed the seriousness of the outbreak by echoing China’s statements and applauded its transparency during its response.

“When governments around the world needed to be on high alert and preparing for COVID-19, Dr. Tedros was showering China with praise instead of demanding vital early-case data that could help determine the origin and quickly put the world on track to containing the virus,” said Dr. V. Sam Prasad, AHF India Cares Country Program Director. “The lack of transparency shown by the WHO chief in the most critical moments of the outbreak is clear evidence why UN Member States need to nominate and appoint a new Director-General. There can be no credibility without transparency – the WHO needs both in its next leader.”

As early as January 14, 2020, the WHO was tweeting that there was no human-to-human transmission of SARS-CoV-2, the virus that causes COVID-19. There were also reports as early as February 2020 of Chinese authorities detaining whistleblowers for attempting to sound the alarm on the outbreak. Since then, the WHO was aware of China withholding key data about the origins of the virus, a point on which Dr. Tedros only recently reversed course and began calling for China to increase cooperation.

“The world is almost two years into the pandemic, and we still don’t have confirmation of how it began,” added Dr. Prasad. “Had Dr. Tedros called for absolute transparency from the outset, an untold number of lives could have been saved, and the world could be looking at a much different outcome from the global response. We can’t change the past, but the WHO and the world can be better prepared for the next global public health crisis – that starts with new leadership.”

While the SARS-CoV-2 origins are unconfirmed, an Italian study identified its first case before the first officially reported case in China. Additionally, a Harvard University analysis showed increased traffic at Wuhan health facilities dating back to August 2019. Under Dr. Tedros’s lead, the WHO either did not have an effective early warning system, knew about this virus and did not report it, or was prevented from knowing about it by the Chinese government. Regardless, COVID-19 was allowed to spread for months under the radar, without effective containment, paving the way for this disastrous pandemic.

AIDS Healthcare Foundation, the largest global AIDS organization, currently provides medical care and/or services to over 1.6 million clients in 45 countries worldwide in the US, Africa, Latin America/Caribbean, the Asia/Pacific Region and Europe. To learn more about AHF, please visit our website: www.aidshealth.org, find us on Facebook: www.facebook.com/aidshealth and follow us on Twitter: @aidshealthcare and Instagram: @aidshealthcare