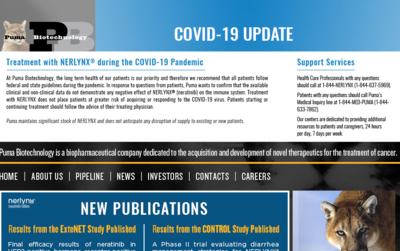 LOS ANGELES–(BUSINESS WIRE)–Puma Biotechnology, a biopharmaceutical company, announced that on September 1, 2021, the Compensation Committee of Puma’s Board of Directors approved the grant of inducement restricted stock unit awards covering an aggregate of 16,375 shares of Puma common stock to three new non-executive employees.

The award was granted under Puma’s 2017 Employment Inducement Incentive Award Plan, which was adopted on April 27, 2017 and provides for the granting of equity awards to new employees of Puma. The restricted stock unit awards vest over a three-year period, with one-third of the shares underlying each award vesting on the first anniversary of the award’s vesting commencement date, September 1, 2021, and one-sixth of the shares underlying each award vesting on each six-month anniversary of the vesting commencement date thereafter, subject to continued service. The awards were granted as an inducement material to the new employees entering into employment with Puma, in accordance with Nasdaq Listing Rule 5635(c)(4).