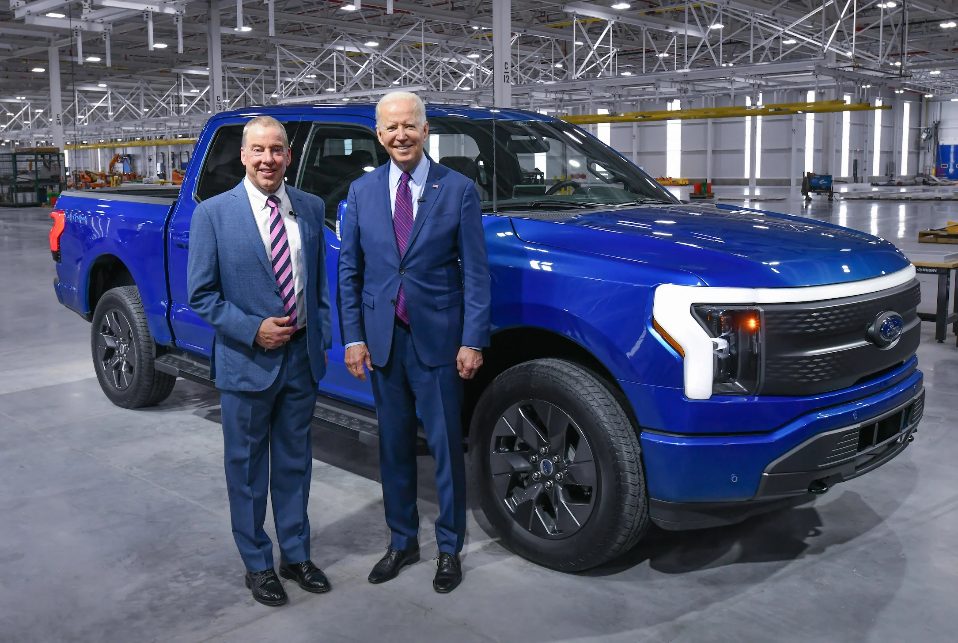 Detroit’s auto giants are already spending big on electric vehicles. Ford Motor Company has electric versions of its Transit van and F-150 pickup on the way to join its popular Mustang Mach-E crossover; General Motors has a slew of new EVs in development that will use its proprietary Ultium batteries and architecture; and Stellantis‘ U.S. brands — Chrysler, Dodge, Jeep, and Ram — recently told investors that they’re going big with electric vehicles over the next few years as well.

But there’s one big question that has yet to be fully answered: Will enough people be willing buy them? Sure, Tesla has done well, but electric vehicles are still a small segment of the overall auto market. When asked, consumers often say they’d be more likely to buy electric vehicles if there were more charging stations — and some tax incentives wouldn’t hurt either.

Those are the kinds of things the federal government can help with. Last week, President Joe Biden, together with representatives of the Detroit automakers and the United Auto Workers labor union, announced new measures to speed EV adoption with the goal of having EVs make up 40% to 50% of new vehicles sold in the U.S. by 2030.

In this Motley Fool Live video, recorded on Aug. 5, Industry Focus host Nick Sciple and Motley Fool senior auto specialist John Rosevear take a first look at Biden’s plan — which had only been released a couple of hours earlier — and offer viewers some context around why the Biden administration is doing this and how it’s likely to help the Detroit automakers.

Nick Sciple: Over the past year, John, we’ve talked a lot about electric vehicles and the future of automotive. There’s been constant news, really, like I said, for the past year or so. Today is no different. Just today, President Biden has announced that he is going to sign an executive order to put forward a new national target for zero-emissions vehicles, numbers being reported as up to 50% of cars sold in the USA by 2030, targeting to be the zero-emissions vehicles. Where does this fit into this EV story we’ve been talking about for so long, John?

John Rosevear: It’s another step forward. I think we’ve already seen, if you look at the financials of companies like GM and Ford, they’re already spending money on EVs. They’ve announced these big cash commitments. But you can see it in their R&D dollars, their capex dollars, and so forth that the money is getting spent. What they always want is some assurance that buyers are going to show up for whatever it is the government wants them to build. [laughs] They are all three, Stellantis, too, now, which is the post-merger Fiat Chrysler and Peugeot. Stellantis is the third of the big three, although Stellantis is more global-focused, but we’ll get back to that. But anyway, what they always want is to know that there’s a three- to four-year lead time developing new vehicles, sometimes longer when you’re doing things like developing new drivetrains and new battery technology and so forth. They want to know that when they spend the money upfront, three, four years later, buyers are going to show up to get them. What they’re hoping for from the government is some support around infrastructure. We need better charging networks in the United States, we need chargers in more places, we need more fast chargers, and so on and so forth and also maybe with incentives. We saw how incentives helped Tesla get rolling back in the day. Maybe we extend those a little further. Maybe we position them around more entry-level vehicles or something like that so that we know that buyers are going to have a little extra motivation to choose an electric over a hybrid or internal combustion vehicle in five years or whatever. When a lot of these come to market in the mid-decade is really about three-and-a-half, four years now, I guess. That’s what they’re looking for, and of course, the Biden administration, the Democrats are happy to deliver that because they see American jobs. China’s rushing into EVs. Europe is increasingly rushing into EVs. We don’t want to be left behind. We want Americans building them from a White House policy perspective. We want good-paying jobs, union jobs with these three automakers. We want American technology and American know-how to be exporting these vehicles, not importing them. It’s good policy for Democrats, and it’s helpful to have that for Detroit.

Sciple: I think, when you look at some of the moves other governments have made around electric vehicles, I think, in particular Europe, we’ve seen this big upswing in EV production. A big part of that has been driven by the European Union saying, listen, if you don’t produce more of these vehicles, we’re going to start dinging you with fines, all those things. There’s not that in place with this current executive order, but what do you think about what’s going to push automakers past this target to really make the rubber hit the road to use a pun?

Rosevear: Well, I think they want to do it anyway, but I think the stick that comes with this, the carrot is the government help with infrastructure and incentives and so forth. The stick, I think, will be announced, I think later today, it might be tomorrow, but I’ve seen some floaters from the White House about this. A comprehensive revamp of fuel economy standards, emissions standards. First of all, they’re going back to the Obama-era plan, which was adopted in 2012 or 2013. Again, at the time with the buy-in of the Detroit automakers, that the Trump administration eased some, they’re putting that back in place right away, and then a couple of years out, they’re going to start to make things a lot tighter around fuel economy and emissions. Basically to make it harder to keep selling internal combustion vehicles with higher capabilities, and so forth. At a moment where GM, and Ford, and Stellantis really don’t want to be spending money developing new internal combustion engines, and so forth, it’s the way things are going to go.