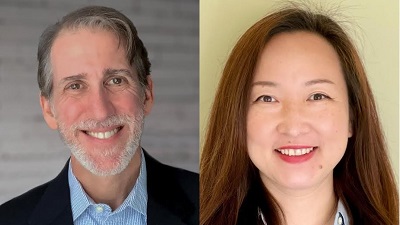 The Community Action Council of Howard County (CAC), the county’s designated anti-poverty organization, is pleased to announce the addition of David Nitkin and Wen Xu to their Board of Directors. The pair will join a distinguished group of board members who lead CAC in achieving the mission of the organization.

“CAC is thrilled to welcome the addition of two incredible individuals to our Board of Directors,” said Bita Dayhoff, president of the Community Action Council of Howard County. “Both David and Wen bring different backgrounds to our diverse team and we look forward to the ideas they’ll bring to the table.”

David Nitkin, a longtime resident of Howard County, served as chief of staff at Howard County General Hospital since 2016, helping direct key quality and safety initiatives that have led to HCGH being recognized as one of only three 5-star hospitals in the state of Maryland. David established the “Downtown Live Where You Work” program at the hospital and helped build partnerships with state and local governments to boost primary care availability and mental health services. Prior to coming to the hospital, he worked in the Office of the Maryland Attorney General as director of policy and communications, helping execute the nation’s first statewide discriminatory profiling guidance for law enforcement, as well as the first national analysis of origin of same-sex marriage laws in states. David also served in the Howard County Office of the County Executive from 2011-2014 where he built and launched major campaigns to create awareness of and support for initiatives such as the construction of a regional broadband network, and economic development in Downtown Columbia and along the Route 1 corridor. Earlier, he spent more than two decades as a journalist, including 12 years at The Baltimore Sun.

Wen Xu joined the Howard County community in 2011 after previously residing in California, Kentucky, and Hong Kong for the past 20 years. Wen is currently an Actuarial Director working for Kaiser Permanente, Mid-Atlantic States where her responsibilities include, but are not limited to developing health insurance premium rates for various lines of business for Maryland, Virginia, and D.C. As an expert in actuarial pricing methodology and related healthcare regulations, Wen is passionate about providing quality and affordable healthcare to all our communities. This led her to becoming actively involved in community services that include organizing and teaching ESL classes to new immigrants and collecting PPE donations from Chinese American communities for Kaiser. Wen is excited to expand her passion of quality and affordable healthcare to a much larger scale through the initiatives that CAC are engaged in.

About the Community Action Council of Howard County:

Community Action Council of Howard County (CAC) was created in 1965 as Howard County’s designated anti-poverty agency. Our mission is to diminish poverty, enable self-sufficiency and advocate for low-income families and individuals. CAC provides a multi-generational, family-focused approached with services for more than 50,000 residents by running the Howard County Food Bank and 14 affiliated food pantries, administering a Head Start and Pre-K program for more than 362 children, offering energy/weatherization assistance and providing housing assistance.