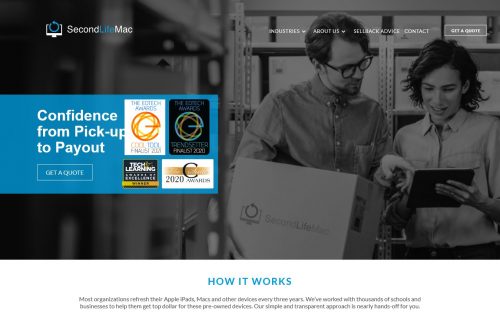 Second Life Mac buys pre-owned Apple devices from schools and businesses, allowing organizations to recoup the remaining value in these devices and then use the funds to invest in future technology purchases or for other purposes. Data is securely erased and devices are refurbished before being resold via wholesale and retail channels.

Brother Christopher Hall, assistant head of Damien Memorial, said he was pleasantly surprised by how much money the school was able to get for its used technology devices.

“It couldn’t have been easier, and the payback was much higher than I was expecting,” said Brother Hall. “Our students take good care of their laptops, and Apple devices hold their value. We are glad to see that someone else will be able to use them.”

Second Life Mac sent a team onsite to pack up and ship the equipment for the school. “I’ve done device sellbacks to other companies, who required us to do a lot of the work and then didn’t pay much for the devices. The payback and work it took to ship in the devices made me wonder if it was worth it.” said Brother Hall. “This time it was easy and the payout was much higher.”

Damien Memorial has been a one-to-one technology school since 2016, providing a MacBook Air to each student for use in the classroom and at home.

“Being a one-to-one school, we were much better prepared for the closure of schools during the COVID-19 pandemic,” said Brother Hall. “Beyond the pandemic, we believe it’s important for students to have their own laptop to prepare them for the future.”

The school is planning another device trade-in soon for older devices they had accumulated, not realizing they still had value.

Damien Memorial was founded in 1962 by The Congregation of Christian Brothers. Today, the school boasts a thriving middle and high school with 600 students. The graduating class of 2021 was awarded more than $6 million in academic scholarships from 25 institutions nationwide. The school is part of the Edmund Rice School Network, an international consortium of Catholic college preparatory schools across the U.S., Canada and South America.

About Second Life Mac
Second Life Mac is disrupting the device buyback industry by coupling the best Apple lifecycle expertise with outstanding customer service, start to finish custody of devices, and the most transparent process. The used devices Second Life Mac procures from schools and businesses are refurbished, data is securely erased to Department of Defense standards, and they are resold via wholesale and retail channels. Headquartered in Skokie, Ill., the company is an Entrepreneur 360 winner, and has been awarded for its innovation by EdTech Digest and Tech & Learning. More information is available at www.secondlifemac.com or on Twitter @SecondLifeMac.