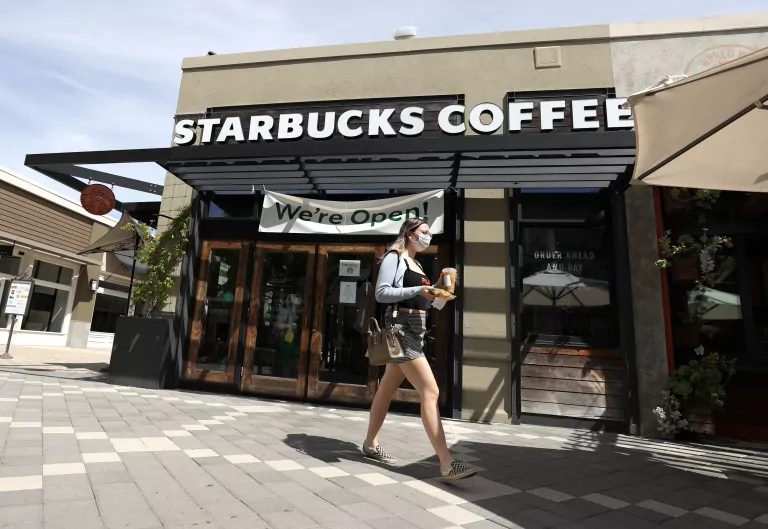 Starbucks has been on a roll as of late, with a surge across all its business segments, regions and product offerings. The new and revamped introduction of cold drinks ahead of the summer months, its emphasis on redoing and rebranding some of its regional stores and the way it tackled the COVID-19 pandemic have made it a superior company and, although anecdotal, you can hardly pass by any airport, train station or city center area without spotting a store by the long lines.

Even so, and although this argument can be made for many companies in this post-pandemic market rally, the company’s share price seems to be overestimating their future growth rates. Although I believe that the company will almost certainly overshoot current estimates by as much as 10% to 20%, current multiples seem a little too high for a company with those growth rates.

The company has several advantages moving forward. The first is the personalized element of their offerings, which customers can shape and shift according to their own tastes, making the Starbucks brand a leading one over other coffee and beverage companies. The second, according to the CEO who spoke on CNBC this morning after the company reported their quarterly earnings, is that they stocked up on certain cyclical products at lower prices, so the recent surging prices of coffee and sugar will have less of a margins impact over the next several quarters. The third advantage is that the company operates so many locations that cost cutting measures, in case of an overall market or economic downturn, can be done by closing down underperforming branches given the close proximity of multiple branches in major cities without losing sales volume.

There are a few risks involved which we don’t yet know the scope of. For the upcoming 12 months, the main one being the impact of the Delta Variant in COVID-19. Many countries in the EMEA and Asia-Pacific regions are experiencing resurgences of the virus and deaths and as a result have begun discussing restrictions and lockdowns to combat those rises. That can have a longer term effect on the company’s business as they rely on these regions for growth beyond the North American region performance.

Even in the United States, there are certain states where the company has a lot of operations in like Florida, Texas and Missouri where cases are spiking again to levels not seen from back when the pandemic just started. However unlikely it is that those states will lock down, individuals are being far more careful and demand for Starbucks can fall in those areas both organically by folks visiting their stores in less frequency and inorganically by individuals not wanting to come and work at those locations, forcing closures in big cities where margins are so high and relied upon for growth.

Right now, analysts expect the company to report slightly accelerating sales growth, even as we take into account the COVID-19 pandemic decline in 2020, growing from $26.5 billion in 2019 to $41.4 billion in 2025, with the growth rate increasing from around 9% to 10.5% throughout that time period.

For earnings per share, they expect a slightly slower bounce back from the pandemic decline as well as a declining growth rate through the same 2025 time period with EPS growing from $2.83 in 2019 to $5.21 in 2025. Growth rates for that time period declines from over 20% in 2022 to 11.7% by 2025. Part of the disconnect is that as office parks and other entertainment venues reopen, they expect higher volume of sales but with lower overall margins compared to some of the high-profile locations, business segments and regions that the company currently operates in.

Even as these figures are solid for a company with such high market share, I still believe that they are a little conservative due to a stronger reopening strategy and the fact that thus far, they’ve been far superior at both following and setting trends to attract younger customers. These factors are set, I believe, to allow them to continue and beat expectations for the next several years.

Another factor worth considering is that right now analysts expect the company to report a roughly 10% annual growth rate for sales, including some overperformance I expect them to show. This is almost double the growth rate expected from the hot and cold beverage industries over a nearly identical time period (2020 through 2026 compared to the company’s 2020 to 2025). This means that the company is currently expected to be gaining market share which is a surprising feat considering the amount of new beverage companies are emerging around major cities in the United States and globally.

Here’s where things get a little sticky. Even as I believe growth is set to be higher than current expectations, the company’s valuation is seemingly lofty for a company with their growth rate. As mentioned earlier, even with them outperforming expectations by roughly 15%, that only leaves an EPS CAGR (compound annual growth rate) of 10.7% from 2019 to 2025, or 14.8% from 2022 to 2025. The company current price to earnings multiple is about 42x, or an average of over 30x over the aforementioned time period.

That multiple seems a bit high relative to the growth rate, as companies like McDonald’s and Dunkin’ Donuts (recently acquired) with similar growth rates are trading at around 25x forwards earnings, once we take into account the growth rate in their beverage segments alone, since a majority of their sales are from other segments.

Although not a big difference, I do believe that a price to forwards earnings multiple of 25x for the next few years is appropriate, presenting the company’s fair value at around $102.50 per share for the next 24 months or so, meaning that current share price of over $120.00 per share is overvalued and should not provide the kind of return I would want in a long-term investment.

Even if Starbucks outperforms current expectations by higher than my projected 15% over the next few years, that really only brings their share price fair value to around where they are right now, indicating that it’s unlikely to provide for any meaningful returns over the next 24 months.

Although Starbucks is in a superior position and is gaining market share, I simply don’t believe that current valuation is worth initiating a new long term investment and am contemplating reducing my position in Starbucks over the coming weeks as we get a better sense of the reopening scene in the EME and Asia-Pacific regions.

I remain highly bullish on the Starbucks business but am neutral to slightly bearish on their current valuation.