Alicia Wilson, Esq. is Vice President of Economic Development for Johns Hopkins University and Johns Hopkins Health System and Associate Professor in the Johns Hopkins Bloomberg School of Public Health, in Baltimore, Maryland. At Johns Hopkins, Alicia leads a core team focused on developing and implementing Hopkins’ institution-wide strategies and initiatives as an anchor institution in and around its campuses both within the United States and abroad. Alicia spearheads the elevation and expansion of Hopkins signature commitment to its communities through investments in real estate, economic and neighborhood development, healthcare, and education.

Prior to joining Hopkins, Alicia served as the Senior Vice President of Impact Investments and Senior Legal Counsel to the Port Covington Development Team. During the 2016 Baltimore City Council legislative session, Alicia drafted key pieces of Tax Increment Financing (TIF) legislation and served as the principal negotiator of the TIF legislation and the two largest Community Benefit Agreements in the history of Baltimore associated with the passage of a $660 million TIF bill, the largest TIF awarded in the history of the United States at that time. The negotiations of the community benefit agreements involved over 200 stakeholder groups representing tens of thousands of residents from across the City of Baltimore.

Prior to joining Sagamore Development Company, Alicia was partner at the downtown Baltimore law firm of Gordon Feinblatt — the sixth-largest, law firm in the state of Maryland. Alicia is actively involved in civic and charitable organizations. She currently serves on the boards of the Center for Urban Families, the University of Maryland School of Law Board of Visitors, the Walters Art Museum, and the National Diverse Attorney Pipeline Program. Most notably, Alicia was recently elected as Chair of the CollegeBound Foundation and as such is the first CollegeBound Foundation alum, first woman, first African-American and youngest Board Chair in the thirty history of the organization.

For her accomplishments and public service, Alicia has received numerous awards and honors. Most recently, Alicia received the 2021 Humanity of Connection Award from AT&T for her commitment and leadership in advancing anchor strategies that elevate and expand communities through economic development, healthcare, and education. She was also recognized, in 2021, by Black Enterprise as one of the 40 leaders under 40 who are “changing the world at local, national, and global levels.”

Her professional and civic leadership have propelled her to the forefront of local and national media attention. Most recently, Alicia was named by the Afro-American Newspaper as the Newsmaker of the Year for 2021. In late 2021, Alicia was featured in Baltimore Style Magazine as one of Baltimore’s Six Women of Strength for her leadership and civic involvement. In 2020, she was recognized as one of the Top 25 Emerging Leaders in Healthcare by Modern Healthcare, by Baltimore Magazine as one of the 30 Women Shaping the Future of Baltimore, and by the Maryland Daily Record as one of Maryland’s Very Important Professionals in Business. In 2019, Alicia was profiled in Forbes magazine as the “The Black Millennial Lawyer Making Michelle Obama More Accessible to Baltimore’s Youth” and Savoy magazine named her one of the “Most Influential Women in Corporate America.” Also, in 2019, Alicia was featured in the Maryland Daily Record as one of the Top 50 Influential Marylanders. In late 2018, the National Business Journal named Alicia as one of the nation’s Top 50 Influencers under 40. \ 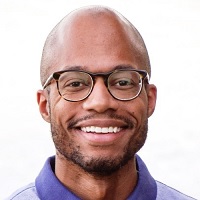 Darius Graham joined the Weinberg Foundation as Program Director, Baltimore in 2018. He is responsible for leading the Foundation’s grantmaking strategy and key partnerships in Baltimore, the Community Services portfolio across the Foundation’s priority communities, and several signature initiatives.

Prior to joining the Weinberg Foundation, Graham led two innovation and entrepreneurship initiatives at Johns Hopkins University including FastForward U, the university’s student entrepreneurship hub, and the Social Innovation Lab, which helped develop new technologies and novel ideas into viable ventures.

Graham previously founded DC Social Innovation Project, a nonprofit that provided funding and pro bono assistance to help launch and grow innovative, grassroots community initiatives in Washington, DC. He is a former Social Entrepreneur-In-Residence at University of Maryland’s Robert H. Smith School of Business and has served on the District of Columbia Commission on National & Community Service. Graham began his career as an associate in the financial restructuring group at the law firm Akin Gump Strauss Hauer & Feld LLP.

He received a B.A. summa cum laude from Florida A&M University and a J.D. from the University of California, Berkeley – School of Law, where he served as an editor of the California Law Review and as editor-in-chief of the Berkeley Journal of African-American Law & Policy. A former Global Shaper with the World Economic Forum, Graham has been recognized by Baltimore Business Journal as one of Baltimore’s 40 Under 40 and has been named to The Daily Record’s Very Important Professionals list. He is a member of the 2016 class of Greater Baltimore Committee’s Leadership Program. Graham serves as trustee of the Baltimore Museum of Art and co-chair of its Public Engagement Committee and trustee of the Baltimore Museum of Industry. He is a Fellow of the second class of the Civil Society Fellowship, a Partnership of ADL and The Aspen Institute, and a member of the Aspen Global Leadership Network.

Career Path | Something we share in common is a diverse and wide-ranging career path that started with being an attorney in a law firm and then transitioning to broader roles that center on community and social impact. Take us through that journey from attorney at Gordon Feinblatt, to senior vice president for the Port Covington Development, and on to Vice President for Johns Hopkins. Tell us about that path and how you decided to take on these differing roles along the way.

Port Covington | I’m sure everyone in Baltimore and even in Maryland knows about the Port Covington project. While its scope and scale has changed over time, this was conceived as a 235-acre, $5.5 billion redevelopment initiative to essentially create a new waterfront community in Baltimore focused on technology and innovation. You were Senior Vice President of Impact Investments and Senior Legal Counsel at the time and led many aspects including the community benefits agreements. Take us back to your time there; this was a massive project, what was your focus or key objective at the time? .

Community Benefits | What were some things that ended up in the community benefits agreement and how were those decided?

Community Leaders | I had the pleasure of meeting some of the community leaders that you worked with on this project – really great people who are passionate about their neighborhood. Can you tell us about some of them.

Lessons Learned | I think you would agree with me that no matter the field that a business operates in, it must consider the social, environmental, and community impacts of its work. Is there a lesson from your time working on the Port Covington project that you think business leaders should absolutely keep in mind?

Role | Switching gears, you’re now in the role of Vice President of Economic Development for Johns Hopkins University and Johns Hopkins Health System. And I believe you are the first person to ever serve in this role. How did this role come about and what is your overall charge

Local Business | As you mentioned, an important focus for you is helping Johns Hopkins connect with and support small, local businesses. How do you find these businesses and how might those interested in doing business with Johns Hopkins be considered?

Board |In 2021, you were appointed to the board of Rosedale Federal Savings & Loan Association. There has been a lot of discussion in the business sector nationally about diverse representation in the c-suite and on corporate boards. You’re a very busy person with your role at Hopkins and numerous non-profit boards; why did you say yes to this board position?

Board Diversity |Often times when the lack of diversity on corporate boards comes up the response is that there just isn’t a strong pool of diverse talent. You and I know that’s not true, but how do you recommend companies go about finding candidates of color for board seats? How did Rosedale find you?

Mentorship |I’ve heard you talk before about the role that mentorship has played in your life and in your career – both in terms of you being mentored and you being a mentor. Can you tell us about one person that has mentored you, one person you have mentored, and what’s been the value of coming at both sides of the mentor relationship?

Motivation | Last but not least, with all of your commitments between your job, boards, and mentoring, when and how do you make time to take care of yourself? How do you recharge and stay motivated and inspired?

Connect with Alicia and Darius LinkedIn