Growing up in Chippewa Falls, Wisconsin, Steve knew he wanted to join the Army after he graduated from high school. “I wanted to jump out of airplanes, so I was in the 82nd Airborne Division in Fort Bragg.” he says. After serving 4 years in the Army and 2 in the Florida National Guard, he decided to move on. “I realized the military was great, but financially, it just wasn’t what I was looking for in life.”

In 1999, he and some buddies from the 82nd Airborne headed down to Boca Raton to attend Florida Atlantic University, where he earned a bachelor’s degree in sociology.

After stints in the mortgage industry and B2B sales, he got into the job fair industry, traveling across the Southeast and Southwest to conduct events. Within a few years, though, Edwards noticed a slowdown in business. “Everybody was working, they couldn’t come to job fairs and turnout was low.” He recalls, or they were opting to apply for jobs online instead. “It was affecting my pocketbook”.

Looking for a better way to connect employers to job candidates, Edwards seized on the concept of virtual job fairs. “People don’t have to travel,” I said, “This is going to be the future,” he recalls.

Steve bootstrapped Premier Virtual with personal savings to launch the business. Once he got the business off the ground he knew he had an idea he could monetize. He was in several mentoring programs along the way as he knew he had a great idea and could sell it but didn’t know everything. He was involved with the VMT, FAU Tech Runway and the FAU Veterans Entrepreneurship Program which is sponsored by Veterans Florida. At the end of the program they conduct a pitch competition for the Entrepreneurs and their business ideas and the winner from each school goes on the represent their school at the State competition. Steve represented FAU and then won the Statewide competition as well. This program, and the early pitch competitions he won, although not significant amounts, were still welcomed since he was self-funding the business.

In 2019, his startup began building a software platform for virtual job fairs. It launched last March, just as COVID-19 arrived – a bit of serendipity that catapulted Premier Virtual to almost instant success. “We went from nobody knowing who we were to being ranked as one of the top virtual platforms out there,” says Steve.

During its first 10 months, the Premier Virtual platform has powered over 2,500 virtual hiring events which has helped more than 25,000 companies connect with over 250,000 job seekers. The company has grown from 3 employees to more than 20 and earned prestigious awards including 2021 Best Companies to work for in Florida. Approximately 200 workforce development boards across the country, including CareerSource Florida, which oversees 24 regional partners statewide, have chosen their platform for virtual hiring events. Premier Virtual also has licensing agreements with The Air Force, Army, and several National Guard units.

Steve says individual companies, colleges, and other organizations are quickly coming on board and that they would have never participated in job fairs if it weren’t for virtual, and he’s bullish on the company’s future. “Covid-19 got our name out there, but now people have embraced the technology and how much more efficient it is. We’ve just begun to scratch the surface of what virtual hiring events will do for employers and job-seekers alike.” 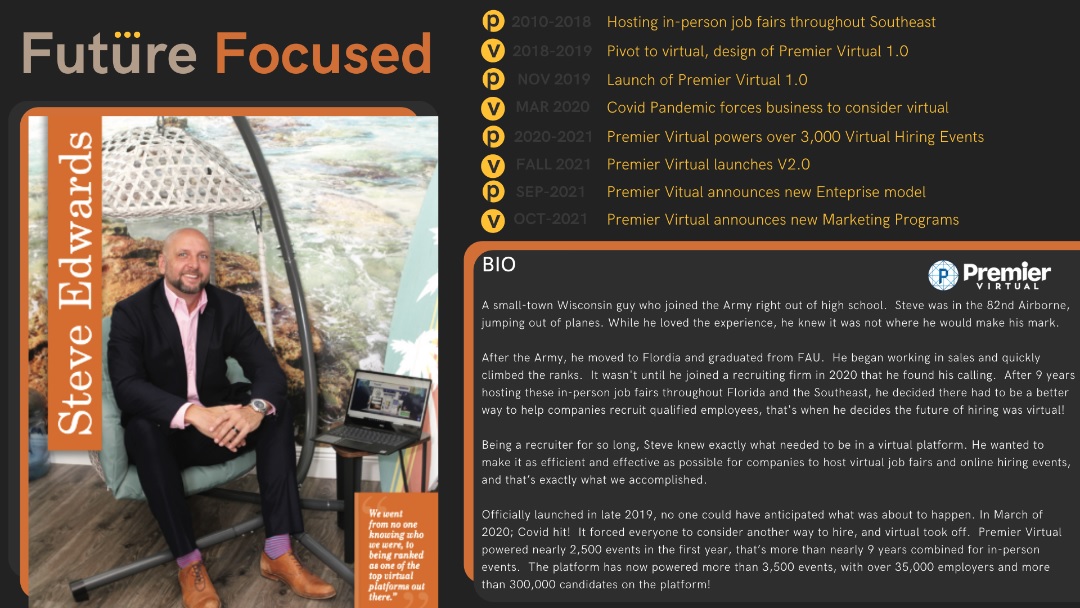 Introduction | Can you provide an introduction to Premier Virtual? Explain SaaS model, # of events, organizations, employees

Milestones | You started Premier Virtual in 2019. Can you tell us about some milestones since the launch? How did you navigate Covid?

How It Works | Can you explain how the virtual recruiting platform works?

Team | Who are the key members of the team?

Clients | Who are your clients?

Veterans | Many of Premier Virtual’s job fairs are geared towards veterans? Why veterans?

Growth | What are the growth plans?

Connect with Steven on LinkedIn

Premier Virtual is a multi-functional software-as-a-service (SaaS) platform designed to facilitate hiring and create virtual environments. From career fairs to conferences, virtual events can bridge the gap between technology and human interaction. PV has developed a custom-built software for licensing; a virtual recruitment platform that has greater functionality and utility for both job seekers and employers. Today’s HR managers are ready for the next evolution of recruiting and this virtual platform can help them save time and money.

Where are all the workers, and can virtual hiring and remote work bring them back?