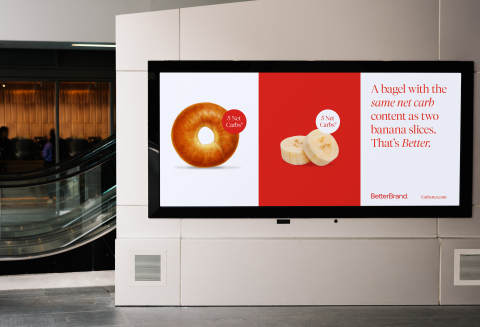 LOS ANGELES–(BUSINESS WIRE)–Better Brand, Inc, has scaled up its manufacturing capabilities to accommodate demand after selling out within a week of its June 22 launch. Often referred to as ‘The Beyond Meat of Carbs,’ the company has made numerous headlines since closing a record breaking pre-seed round earlier this year, marking its founder, Aimee Yang, as the first sole female founder to raise over $1M in a venture led pre-seed round across the food tech, food and beverage, and consumer sectors (as noted by Crunchbase). The round was led by large food tech player VERSO capital, placing Better Brand in a portfolio amongst unicorns Impossible Foods and Eat JUST.

Better Brand’s first product, The Better Bagel, transforms the carb heavy bagel into the net carb equivalent of ½ an orange, or 2 slices of banana, and has immediately become a celebrity favorite, having been boasted by numerous celebrities, models, and wellness experts including Patrick Schwarzenegger, Dillon Francis, Simon Huck, Jason Kennedy, Nicole Cogan, and Katie Austin to name a few – driving the company to immediate sell out.

Per Schwarzenegger, who serves as an investor and advisor to the company, “Better Brand represents the true future of food. The Better Bagel is delicious, and the company’s mission of pushing beyond boundaries and limitations is both exciting and inspiring.” Schwarzenegger is no stranger to the investment world, having been an active investor and advisor for numerous successful brands including Simulate, a plant based nugget company that recently raised $50M in Series B funding, Super Coffee, who recently reached a $400M valuation, and Liquid IV with a recent acquisition by Unilever. Schwarzenegger is also a successful entrepreneur in his own right, as Blaze Pizza now boasts 300+ locations nationwide.

Better Brand utilizes pairs its ‘Grain-Changing Technology™‘ with real, clean label ingredients to completely transform the consumer experience with food, allowing consumers the freedom to indulge in their favorite comfort foods without fear of negative health consequences or weight gain. According to CEO Yang, “The excitement and support we’ve seen is unbelievable by any benchmark, and is nothing short of remarkable. Consumers are sick of settling, and are hungry, pun intended, for a world in which guilt and compromise are things of the past. We are excited to be accelerating our course and are just getting started.”

Better Brand has since scaled its operations and has relaunched ‘The Better Bagel’ via its website www.eatbetter.com this week. The company is quickly expanding its distribution, and will be announcing its strategic on-the-ground partners next month.

About Better Brand
Better Brand is a food tech startup marking a new era of nutrition by driving innovation in the multi-trillion-dollar refined carb industry and designing a Better future of food. Better Brand was founded on a set of simple, yet powerful beliefs: the belief that unnecessary limits are meant to be broken; that everyone deserves to enjoy freedom and joy to the fullest; the belief that a Better world is possible, and that together, we’ll create it. Better Brand pairs its Grain-changing Technology™ with real, clean label ingredients to break a paradigm in diet and healthy eating; giving consumers the freedom to indulge in their favorite comfort foods without restriction, and without sacrificing taste. Better Brand made its debut with its first disruptive product, ‘The Better Bagel’, reducing one of the most carb-heavy foods into the net carb equivalent of ½ of an orange in June 2021. ‘The Better Bagel’ is available for purchase via the company’s website www.eatbetter.com , and will be available for Nationwide distribution next month. For more information, visit eatbetter.com, and follow the brand on social @eatbetter.

About VERSO Capital
VERSO Capital is a global Merchant Banking firm founded in 1958 and headquartered in Luxembourg. The firm focuses on alternative assets including private equity, venture capital, real estate and proprietary capital investments. The VERSO model is built on three pillars: equity partnership, off-market transactions and technology. We advise, we invest, we execute. www.versocapital.co.