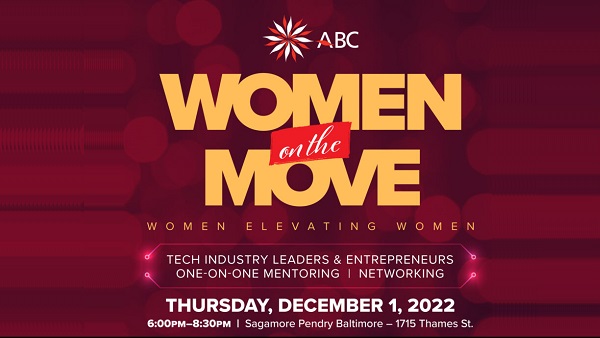 Associated Black Charities returns in-person for the first time since the pandemic for its Women on the Move networking event on December 1st, 2022. The 5-Star Sagamore Pendry Hotel in Fells Point will serve as the backdrop for an evening of networking, mentoring, and guest speakers focused on “women elevating women”.

Crystal I. Berger, former FOX News journalist, media tech entrepreneur, and founder of EBO, will lead guest speakers Bianca J. Jackson, Arion Long, and Ellington West in conversation about female-led innovation in Baltimore. Long is the Founder and Chief Estrogen Officer at Femly and inventor of a touchless, first-of-its-kind period care dispenser. With projects funded by Pharrell Williams and Beyoncé, Long is known for helping organizations stock free period care in restrooms. Jackson, the owner of BrickRose Exchange and a Metaverse and Web3 Creative Consultant for businesses, creates multi-sensory events and experiences impacting over 5,000 people around the globe. In 2018, Jackson’s Metaverse project at USA Today, The WallVR, won her a Pulitzer Prize. West, co-founder and CEO of Sonavi Labs, created Feelix, a smart stethoscope and AI-enabled platform that harnesses the power of machine learning to identify and track respiratory abnormalities with the same accuracy as a trained physician. Each guest adds a unique perspective on women-led leadership in the tech community.

ABC’s 2022 events have been crafted to educate, elevate, and celebrate the Black business community in Maryland. This year’s guest panel continues in that vein, inviting women of impact to share their entrepreneurial contributions to Baltimore’s innovation and technology communities. Prior to the 7 PM curated panel in Sagamore’s Ballroom, guests are invited to an intimate networking hour that includes on-one speed mentoring with local Black businesswomen.

Remarks will also be offered by Janet Currie of Bank of America and Tawana Bhagwat, Chair of the Board of Directors of ABC. Incoming CEO of ABC, Chrissy Thornton, is also slated to be in attendance. Mentors for the speed networking opportunities are being confirmed as of press time and will be listed on ABC’s website. The lead event sponsor is Bank of America, with additional vital support provided by PNC, Wells Fargo, Johns Hopkins University & Medicine, Whiting Turner, and the Afro-American Newspapers. Additional media support for the event is provided by Pinnacle Media LLC. Tickets are available now at abc md.org, with proceeds benefiting ABC’s work to close the racial wealth gap in Maryland and end structural racism.

ABC was founded in 1985 to represent and respond to issues of special significance to Maryland’s African American communities. ABC is an educator, advocate, and supporter to eliminate race-based structural barriers and advance long- term solutions that create new opportunities for African Americans to thrive financially and build a stronger economy for all. For media bookings and coverage, please email Deborah Best, dbest@abc-md.org.